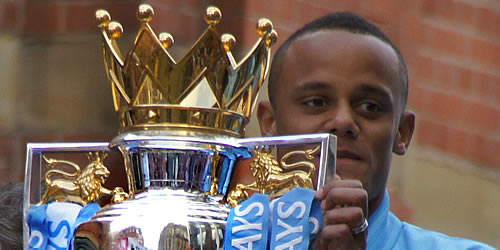 Vincent Kompany believes Roy Hodgon’s England are the team most likely to pull off a surprise victory at this summer’s European championship.

The Manchester City and Belgium defender, who will face Hodgson’s side at Wembley in a warm-up game on Saturday, is expecting the Three Lions to impress in Poland and Ukraine.

“England are definitely my pick of the bunch as the surprise team at the Euros,” Kompany told the Sun.

Belgium did not qualify for this summer’s tournament but Kompany is already looking forward to the 2014 World Cup in Brazil.

“I know I won’t be going to the Euros but we [Belgium] have such high ambitions for the World Cup,” he continued.

“This game [on Saturday] is an important start for us preparing. It is just as important for us as it is for England. If we can win it would cap the season for me.

“There is an incredible amount of talent. People call it the golden generation. I am not worried we are not appearing in the Euro 2012 tournament.

“The 2014 World Cup is our aim and I guarantee you that we have a generation which can stay together and rule for the next 10 years.

“Don’t judge us now, judge us over the next few years.”

Sergio Aguero insists he wants to stay at Manchester City

Jake Livermore: Tottenham was the only option for me