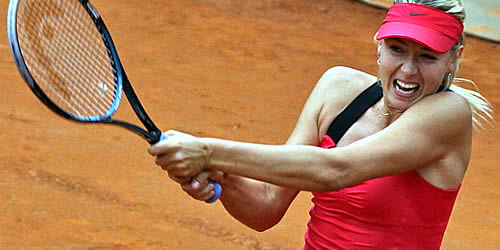 Maria Sharapova recovered from a set and 4-0 down to defeat Li Na Photo: Marianne Bevis

There have been plenty of surprises, and not a few disappointments, for the followers of the women’s draw in Rome this week.

As if losing one No1 was not bad enough—Victoria Azarenka pulled out after her first match with a shoulder injury—the tournament went on to lose two other former No1s.

First, Caroline Wozniacki was forced to retire with respiratory illness in her first match and then Serena Williams announced her withdrawal from the semi-finals with a lower back problem.

To add insult to injury, Williams had outlasted the home heroine, Flavia Pennetta, for the four games that the Italian woman managed to play before a wrist injury stopped her popular campaign.

But the sun, in the end, seemed to shine on the women’s final. The last two standing were arguably the most widely-recognised and popular in women’s tennis. Only this week, the names of Maria Sharapova and Na Li were, along with Williams, amongst just three female athletes on Forbes Magazine’s Most Powerful Celebrities list.

And in another stroke of good fortune, the final pitched the defending Rome champion, in the tall, cool, blond shape of Sharapova, against the French Open champion in the compact, balanced, extrovert package of Li.

For Li, though, the outlook was not entirely favourable. She was without a title since Roland Garros last year and, since reaching the final of her first tournament of the year in Sydney, her best results had been quarterfinals—until now.

For Sharapova, Rome represented her fifth final of the year and her first title came only last month on the clay of Stuttgart. She beat the Nos1, 3 and 5 seeds to do so and has looked stronger with each passing match in Rome, too.

Yet this had the makings of a tight contest. They may never have met in Rome, but they had met twice at Roland Garros—notably last year when Li beat Sharapova in straight sets.

The first set was indeed as close as predicted, see-sawing with a near-perfect symmetry from beginning almost to the end.

They both came out firing on all cylinders to produce heavy, deep and accurate hitting with remarkably few errors. Both clearly intended to take control of the match from the start, one with near-silent aggression, the other roaring her intent with every stroke. Sharapova broke quickly in the third game, only to see Li break back in the fourth.

The next two games went to deuce, Sharapova holding off a break point in the sixth, and next came two love holds of serve. Until the last moment, it could have gone either way but Sharapova had the disadvantage of serving second and so a break point won by a huge return of serve from Li was also set point. Another bullet of a forehand return did the job and a calm Li returned to her chair with a 6-4 lead.

The second set was, in its own way, just as much of a see-saw but this time divided into two halves: the first half all Li, the second half all Sharapova.

The Chinese woman took what looked like an overwhelming lead of 4-0 as her crisp, hard hitting barely allowed the Russian on the scoreboard. Li was playing with great balance, and timing the ball to perfection so, while there was rain in the air, it did not seem in danger of interrupting this exhibition before its straight-sets conclusion.

But a remarkable swing in momentum came with two break points to Sharapova in the fifth game and, hard as Li resisted through two more break points, she could not hold off the growing bombardment from the Russian. Sharapova broke the run of six Chinese games and went on a tear of her own, cutting down her own errors and forcing Li’s hand.

The Chinese woman’s forehand was the first to go, quickly followed by her serve. Her error count rose to 24 compared with 13 in the first set, and her serve dropped from 72 percent to 46. That fed Sharapova’s confidence and her right arm. She levelled to 4-4 and went deuce on Li’s serve courtesy of a double fault. Another double fault gave Sharapova a 5-4 lead and she served out to level the match.

Remarkably, the third set unfolded in the same mirror image. Sharapova broke in the opening game and then held for a 2-0 lead. The two protagonists had the same number of points, 136, but Sharapova had all the impetus.

Still the rain came down, now more persistent, but all the signs were that this would soon be over, and although Li stopped the run of games in the third, she was broken again in the fifth.

But cue another switch in the flow. The Li of the first half of the match returned to take the next four games and a 5-4 lead. The rain poured down, the umbrellas were up, but the centre court crowd sat it out.

At 5-5, 30-30, there was a brief pause for the lines to be dried in an effort to see this match to its conclusion, and Li held her focus to lead 6-5. The umpire offered a chance to stop but Sharapova declined and very nearly lived to rue her choice. She twice faced a break point—and match point—through four deuces before taking this compelling match to a tie-break.

But this finely poised drama was halted as the back-court became too saturated to play and green tarps were hauled into place. All the crowds could do was watch the puddles fill or seek out some sustenance to the soundtrack of the cheering football fans pouring down the road to the Olympic stadium next door.

What few of those fans knew was that the Foro Italico was in lock-down, roads closed, transport cancelled, no place to go. Everyone would sit this one out to its conclusion—whenever that might be.

That conclusion came two and a half hours—the fourth year in a row that rain had interrupted play on the final weekend—but once the finalists were back, it was the work of little more than five minutes. Fortunately, both hit the ground running but it was Sharapova who took first blood for a 3-0 lead with the help of a net cord. Li pulled level with a big volley put-away and then a crosscourt winner but could not contain the power of an opponent who bristled with determination.

Just how finely balanced this see-saw of a match was only became clear after trophies were awarded and speeches made. Sharapova may have scored one more point than Li in the third set but she scored one point less than Li in the match.

Such is the unique and sometimes heart-breaking scoring system of a tennis match. And such is the drama that it can create.