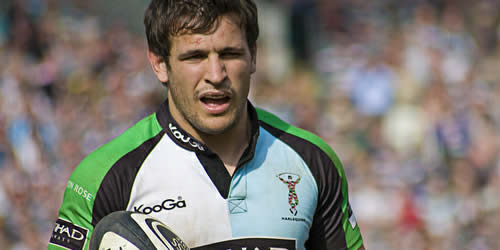 Danny Care has not been far from the headlines this season Photo: vcorne00, via Flickr

Care has never been far from the headlines this season, after missing the 2011 World Cup through injury, the Quins scrum half was arrested four times in three months for various alcohol-fuelled misdemeanours.

He was charged with drink-driving after Christmas, prompting then England interim boss Lancaster to omit Care from his Six Nations plans.

However, after a string of fine performances in the backend of the Aviva Premiership season, culminating in his star showing during the weekend’s win over Leicester at Twickenham – Lancaster has finally forgiven Care.

The Harlequins man, who has been working with another World Cup winning scrum half Kyran Bracken in the second-half of the season, has been included in the England squad for the tour of South Africa – and Dawson is convinced Care is the man who should be starting this summer.

“Danny Care is the form scrum-half at the moment,” said Dawson, who was at Twickenham working with the Aviva Premiership Rugby Schools Programme, which is designed to increase participation in the sport and unearth young England stars of the future

“He’s a quality player; he has a good understanding of the game. He organises well and when you put all those characteristics together the opposition have to look out for you.

“The focus is on him rather than wider out which creates the space for the fly-half and the other guys in the backline – he’s a handful and teams need to be wary.

“His skills are superb. He’s coming back to form and would possibly be the best number nine so it gives Stuart Lancaster a hell of a decision to make.

“If you need inventiveness and your forward pack is going well – you want a threat and that’s why Danny Care is your man.”

Just like during the 2003 World Cup, where Sir Clive Woodward had the luxury of selecting his number nine from Andy Gomarsall, Dawson or Bracken – Lancaster has an avalanche of quality to choose from in South Africa.

As well as Care – Lancaster also has Leicester number nine Ben Youngs and Northampton’s Lee Dickson in his travelling party for South Africa.

Youngs was the number one choice for the number nine jersey during Martin Johnson’s tenure, while Dickson finished the Six Nations as England’s preferred scrum half.

And despite opting for Care – Dawson admits Lancaster is blessed with options at nine and admits all three would be a worthy starter for England in South Africa.

“There are three good scrum-halves in England with Lee Dickson at Northampton, Danny Care and Ben Youngs – all three are very talented indeed,” added Dawson.

“You can only see the three of them going through to the World Cup if they stay healthy.

“It has helped Ben Youngs that Leicester has come into a bit of form and he’s got into the rhythm of playing and getting back to the basics well, while Lee Dickson is the current incumbent.

“He is a lot more pragmatic than Youngs and Care. If you wanted a scrum-half that you knew what you were going to get from them, he’d be your man.

“To organise the forwards in the big, high pressure games, he’s the one you go for. Any country in the world would love to have three scrum-halves of that quality so it’s a great position for Stuart Lancaster, less so for the players.”

The Aviva Premiership Rugby Schools Programme is designed to increase participation in the sport and unearth young England stars of the future. Find out more at avivapremiershiprugby.com