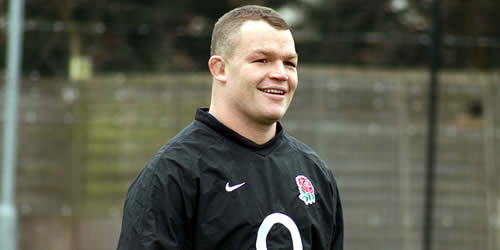 Prop Matt Stevens will miss England’s tour to South Africa after picking up a shoulder injury against the Barbarians on Sunday.

Stevens was forced off just after half-time during the Red Rose’s 57-26 win at Twickenham, with Worcester’s Matt Mullan coming on in his place.

For the three-Test tour head coach Stuart Lancaster has called up Gloucester’s Rupert Harden in place of the 29-year-old Stevens, who played in all five of England’s RBS 6 Nations matches this year.

Harden, 26, is yet to win an international cap and Lancaster believes his call-up is well deserved, despite the unfortunate circumstances.

“Firstly, it’s really tough on Matt but he has been assessed by the medics and he wouldn’t be able to train or play for some time,” said Lancaster.

“We wish him all the best but it’s a great opportunity for Rupert, who has been the first-choice tighthead for Gloucester this season and also involved with the Saxons during the Six Nations.”

First-choice centre Manu Tuilagi has been cited for a tip-tackle on Harlequinsand England scrum-half Danny Care during the Premiership final.

Care was not hurt by the tackle and dusted himself off to play a starring role in Harlequins’ first English Premiership title.

Tuilagi scored a try against France and was prevalent throughout this year’s Championship and the 21-year-old’s case will be heard in Bristol on Tuesday night.