Steven Oldham looks back at the main talking points after an entertaining Monaco Grand Prix, where Webber clinched victory 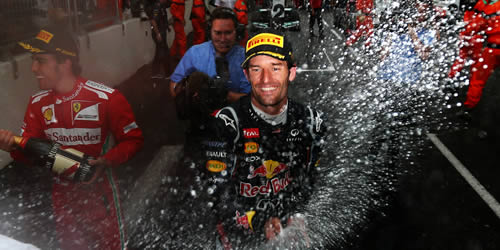 Webber is a genuine championship contender

For so many years, Mark Webber has been the likable nearly man, who never quite gets there. But in 2012, things seem different. His victory in Monaco was more than impressive in the difficult conditions in the race’s closing stages. With drivers of the calibre of Nico Rosberg and Fernando Alonso filling his wing mirrors, Webber managed to keep his cool as the unpredictable weather threatened to undo the Australian’s good work throughout the rest of the race. An excellent start – so often Webber’s downfall – established him at the front and, despite this being the first time the Aussie has stepped onto the podium this year, he is just three points behind Fernando Alonso. The 35-year-old also appears much happier at Red Bull than he has been over the past two seasons – particularly after last year’s washout, where he was annihilated by Sebastian Vettel along with the rest of the field. This could just be Webber’s year if he can recreate his Monaco form at other tracks. And few would begrudge him a world title.

What a difference a couple of months makes. Jenson Button took a deserved victory in Australia, continuing the sort of form that saw him produce his best season in F1 last year – even eclipsing his title-winning year. However, after another disappointing Q2 exit in Monaco, he was jumped by the lowly Caterham’s Heikki Kovalainen in the aftermath of the first corner chaos. He remained there for the majority of the race, unable to pass Kovolainen, and the Brit finally lost his patience late on in the race, spinning out after trying an overtake on the Finn. The 32-year-old seemed resigned to a miserable race after qualifying, admitting the pace wasn’t there. He now lies over 30 points off the lead in the driver’s standings, and whilst this can easily be regained, he has only picked up two points from a possible 75 in the last three races. Perhaps returning to Montreal next time out – the scene of his incredible last to first win in 2011 – will see him return to his best.

Kovolainen needs to move to another team

Kovolainen has consistently outperformed in his car over the past couple of seasons. Far and away the most impressive driver of the three newest teams to the sport, it is time he started to think of his own future. It is commendable that he has stayed loyal to the cause after being unceremoniously dropped by McLaren in 2008. He dominated qualifying specialist Jarno Trulli for the majority of the two seasons they spent together at Lotus, and he has driven out of his skin on several occasions in qualifying to oust the bigger teams – most memorably in Bahrain this year, where Michael Schumacher was embarassed to be knocked out in Q1. Despite his obvious commitment, privately Kovolainen must be itching to get into a more competitive car given the unpredictable nature of F1 this year – would he be producing the same sort of performance as Sergio Perez in the Sauber for example? Who knows.

DRS is ineffective at Monaco

The tight and twisty circuit in Monte Carlo does not lend itself well to one of F1’s most modern toys. DRS, which has proven so effective at increasing overtaking at circuits, is pretty useless in Monaco. With no substantial straights for the cars to take full advantage of the rear wing device, the system’s impact on races is restricted. The only opportunity to do so comes from the exit of turn one up to the entrance of Casino Square, due to the slight curve on the uphill piece of track – but it is probably too dangerous to make a daring maneuver. However, what the race lacked in DRS-aided overtaking was compensated for by close racing up and down the field – from the incredible closing sequence at the front of the field to Button’s toils stuck behind Kovolainen, and some brave overtakes from the likes of Sergio Perez.

Maldonado is F1’s Jekyll and Hyde

After his sublime race-winning performace in Barcelona, the Venezuelan had a shocker in Monaco. His occasionally aggressive and undeniably dangerous conduct to his fellow racers is a worry. He showed last time out that he can live with the big boys at the front so why he feels the need to barge his opponents – Perez this weekend, and Lewis Hamilton in Spa last year – is anyone’s guess. There will come a time the red mist will descend and someone will be seriously hurt – either himself, another driver or both. After starting last due to a gearbox change and a 10-place grid drop for the Perez incident, his race ended before the first corner after mounting the back of Pedro de la Rosa’s HRT, taking them both out of the race. He will be particualrly disappointed with this as Monaco was the scene of one his better drives for Williams last season before being knocked out of the race as Hamilton made a clumsy overtake.