McLaren's Lewis Hamilton left frustrated by a disappointing race at Monaco, where he finished in fifth place 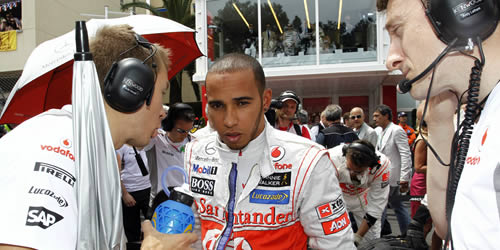 Lewis Hamilton could not hide his disappointment at McLaren’s poor performance at the Monaco Grand Prix after he finished fifth and Jenson Button span out of the race.

Hamilton said he feels like his team have been going “backwards” in recent grands prix after Red Bull’s Mark Webber sealed his second victory in three years in Monaco.

“I really dislike going backwards,” said Hamilton. “My start was one of the worst in a long time. I don’t know what my team was up to there.

“I just don’t understand why it happens when the two guys next to me and two behind get perfect ones. I was very fortunate not to get caught up in a crash. It’s quite an easy thing we do, we do thousands and thousands of practices, it should not be a problem.

“In the pit stop I lost quite a lot of time, not able to keep up with Alonso and then Seb got me through his pit stop. We haven’t had a grand prix weekend where something hasn’t gone wrong.”

Hamilton claims he is driving better than ever and says he could not have done any more to improve his race in Monte Carlo.

“I’m driving as well as I’ve ever driven,” he continued. “I’m not making mistakes at all and it feels great.

“I can feel comfortable now leaving the track and knowing that I couldn’t have done any more. It’s just unfortunate the car wasn’t quick enough. But we are a great team and we will meet next week and see where we can improve the car.”

RaboDirect Pro12: Ospreys cause upset against Leinster in final