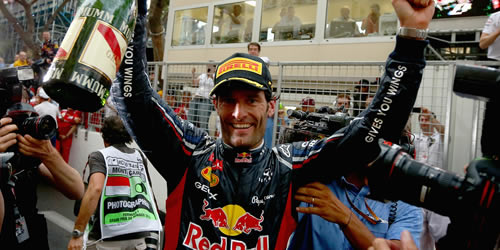 Red Bull’s Mark Webber admitted he was left with an “incredible” buzz after he won a thrilling Monaco Grand Prix ahead of Mercedes’ Nico Rosberg and Ferrari’s Fernando Alonso.

The Australian, who led from pole in a race which saw intermittent rain liven up an already entertaining affair, dominated to seal his second win in Monte Carlo in three years and ensure that six different drivers have won each of this year’s grands prix for the first time in Formula 1 history.

“I’m feeling incredible,” said Webber after his win. “It was an interesting race. It was reasonably straight forward at start, getting the gap and managing super-softs.

“Then it was matter of trying to get back into gap on track after the stops. The weather was threatening around the pit stop window but Nico went for it, went for undercut, so a few people had to react to his chess move.”

McLaren’s Lewis Hamilton finished a disappointing fifth after losing out to Alonso and Red Bull’s Sebastian Vettel, while his team-mate Jenson Button was hampered by a poor start and was forced to retire after a spin.

Hamilton said: “It wasn’t the best result, but this is motor racing. I really dislike going backwards, but we still go away with some points.

“There are many races ahead of us and we still need to keep pushing. My start was one of worst starts I’ve had in a long time.

“I don’t understand why it happens when two guys next to be and those behind us got perfect starts. I was fortunate not to get caught up in the crash. We do thousands of starts, it shouldn’t be a problem.”

Button added: “It was a tough afternoon but congratulations to Mark, he’s a good lad and it obviously livens up the championship. Hopefully we’ll have our day soon.”

The result sees Alonso move to the top of the standings on 76 points, three clear of defending champion Vettel, who is level on points with Red Bull team-mate Webber in third.

Hamilton drops to fourth on 63 points, 10 behind Webber – and Button is seventh on 45 points ahead of the next race in Montreal on 10 June.

London 2012: Kelly Sotherton retires due to back problem