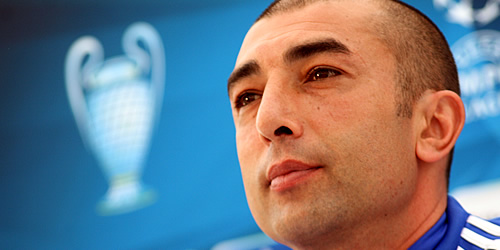 Roberto Di Matteo has admitted Chelsea’s injury and suspension problems have given the Blues boss a “headache” ahead of the Champions League final against Bayern Munich on Saturday.

Chelsea will be missing captain John Terry, Branislav Ivanović, Ramires and Raul Meireles for the Munich showpiece at the Allianz Area.

In addition, defensive duo Gary Cahill and David Luiz plus Florent Malouda are all struggling to be fit in time for the final – although the Italian confirmed that the two centre-halves would train with the first-team on Tuesday.

The 41-year-old, who refused to admit that the final is his most difficult managerial challenge to date, conceded he may be forced to call-up players from the reserve team to fill his 18-man squad for the final.

“Maybe [it will be my most testing assignment] because it’s a one-off game,” said Di Matteo.

“Normally we’ve got two legs but this is going to be one shot. And with all the problems we have it’s certainly causing me a headache.”

Di Matteo also insisted that suspended Chelsea skipper Terry will still have a vital role to play in the Blues’ preparation for the Munich final.

The 31-year-old England is serving a ban after receiving a straight red card for lashing out at Barcelona’s Alexis Sanchez in Chelsea’s semi-final second-leg triumph at Camp Nou.

But the interim Blues boss expects Terry and the other suspended players to help their team-mates prepare for a “huge” game against the four-time European champions.

“I think Terry and also the other suspended players will have to support the rest of the team and be influential in the build-up and on the day of the game with the experience that they have,” Di Matteo added.