Rome dawned on the first second-round day at the Foro Italico in an altogether kinder mood. The wind was a little lighter and the temperature a little warmer.

Yet the storm’s wake left a trail of stories—some big, some small but eye-catching, and a few that needed no words at all.

There was Italian wild card, Paolo Lorenzi, thrilling the home crowd with a three set win over Nikolay Davydenko. 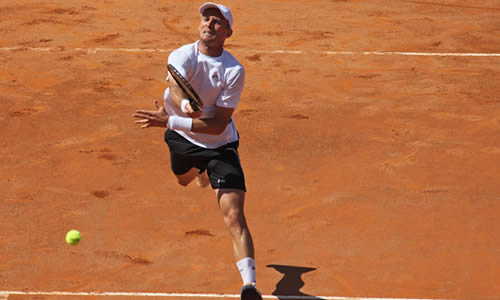 But it was bad news for the home crowd as their biggest star, Francesca Schiavone, winner of the French Open in 2010 and finalist last year, fell in her first match in just one and a quarter hours. 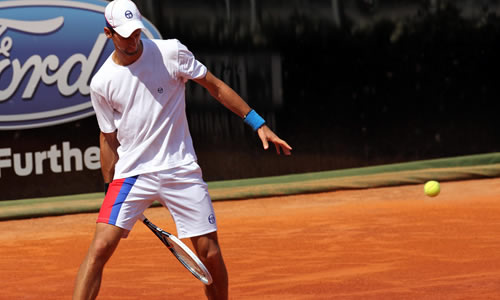 Djokovic had time to showboat for the crowds during practice

She thus claimed the unwelcome tag of first—and as yet only—seed to fall. Schiavone has now won only two matches in her nine last tournaments: worrying times indeed for the charismatic Italian. 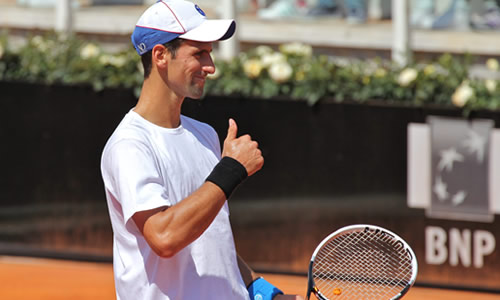 Djokovic thanks the crowd for their cheers during practice

She was almost joined by a men’s seed, No9 John Isner, who opened poorly to lose the first set against the flairy single-handed backhand of Philipp Kohlschreiber. But the American found his game just as the German served for the match and, in a dramatic turn-around, took the second-set tie-breaker and eventually the match. 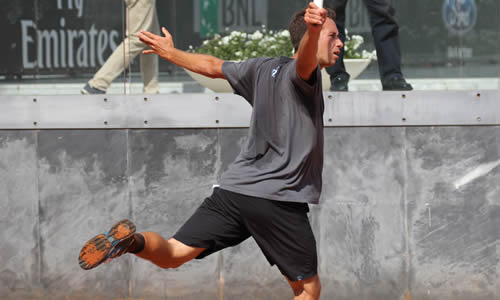 Mid-afternoon, there was a first appearance by Rafael Nadal, fresh-faced from a break with family and friends—and fishing: “Being in the middle of the sea with fantastic weather and I was able to swim a little—it was fantastic for me.” 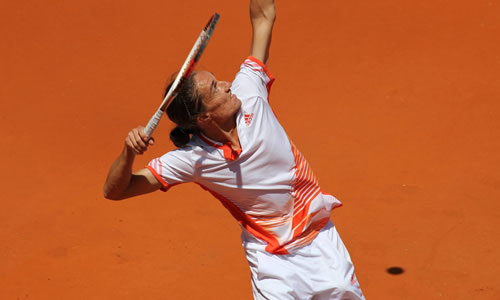 Popular Dolgopolov succumbed to illness after losing the first set in his first match, 6-0

Quickly refocused to the matters in hand, he was ready with his answers. On his No3 ranking: “You have to be in the semi-finals even if you are No2 or 3—doesn’t make a big difference.”

And on his immediate target: “My goal now is Roma and I don’t think about blue clay, I think about Roland Garros.” 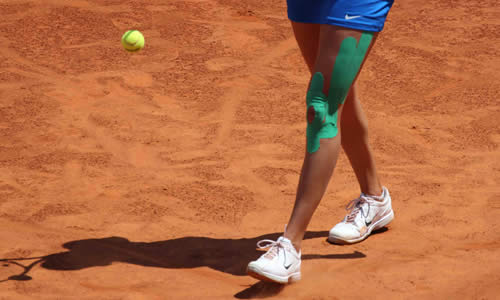 Prize for most impressive knee support goes to Julia Goerges

Andy Murray, turned 25 today, missed Madrid with a back problem so the first question in Rome was entirely predictable. And the answer was good: “I have been training for six or seven days now and [the injury] feels fine.”

The second question, too, was not a surprise—those courts in Madrid. He assured everyone he had watched none of it during his time off, but added that everyone had since congratulated him on his decision not to play: “People have been saying that I was much smarter than they were…I’m not going to have to make adjustments [for the French Opne] which I would have had to do from Madrid.”

He celebrates his birthday with what could be a cracker of an opener against David Nalbandian.

It was a bad day for Alexandr Dolgopolov when what promised to be a highlight of Monday afternoon ended, one 6-0 set down, in retirement against Fernando Verdasco due to illness. 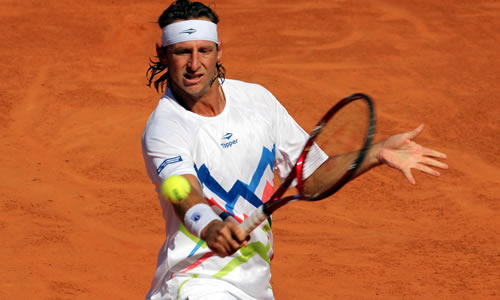 Nalbandian won his opener but next faces Andy Murray, who has beaten him in their last four matches

The Spaniard was then first up today in a match that brought the crowds flooding in—against compatriot David Ferrer. Sadly, it was a different Verdasco from the one who pounded to a first victory over Nadal in Madrid. Twice he led by a break in each set, and twice Ferrer—as dogged and intent as ever—broke back to take the win in straight sets.

The fans still await the first match of Novak Djokovic—whose contest against the youngest man in the draw, Bernard Tomic—headlines today’s evening session. He filled the Pietrangeli court for his practice, playing up to the fans and then signing for an age.

But the tournament will have to wait a little longer for the other star attractions who are scheduled to begin tomorrow. Nadal has broken cover to practise in the Foro Italico already. Roger Federer, just arrived from his victory in Madrid, has only broken cover to do some sight-seeing in the city. That’s what families do to you!