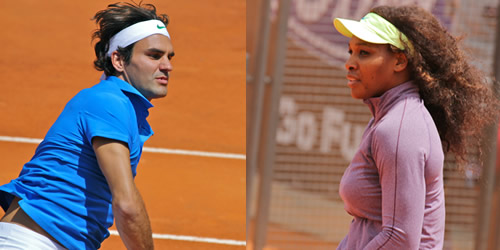 For the two champions who high-tailed it to Rome from Madrid with winners’ trophies, the sun began to shine on their campaigns as well as on the Foro Italico.

Both arrived looking a little weary and both confirmed that the aches and pains that accompanied victory on Spain’s high plateau were taking time to wear off.

Serena Williams has already played two matches—her rise to No6 in the rankings this week came too late to affect the top-8 seedings—and her second against Nadia Petrova, at over two hours and three sets in a dust-bowl of a Centre Court, was a test of determination and physical fitness.

She admitted it was not proving to be an easy road: “You just have to be able to adjust and make the best of it…everyone has aches and pains here and there and today I felt it a lot because I have been paying a lot and practising even more. Hopefully I’ll be better by tomorrow.”

Roger Federer, after his first match here in Rome, revealed just how close a call it was whether he played or not. He made the decision, after a short practice just a few hours before his scheduled opener: “I just wanted to see how I felt and if there was anything major.

“At least here we have two days off, which can be a life-save and, in my situation, I don’t think I would have played this tournament if I would have had just one day off.”

Both may therefore be counting their lucky stars that their particular sections of the draw are panning out rather better than those of their rivals.

By the time all the second-round matches were played out, the biggest obstacles to Williams’ route to a Rome final were gone.

The first, an Agnieszka Radwanska outplayed in three sets by Petra Cetkovska, was also tired from her successful but intense run into Rome. She had won 32 of her 38 matches, including two titles, but the talented Czech was too much for her: “Petra played very well today.

“She’s a good player on a slow court…Losing at the beginning of the tournament is disappointing. I’m tired from all the matches I’ve been playing and I have some problems with my back. I’m going to take a few days off then play Brussels.”

Then came the surprise announcement from Williams’ next expected opponent, Caroline Wozniacki: the No6 seed retired with a respiratory tract illness.

Yet more of a surprise came late into the Rome evening when top seed, Victoria Azarenka, beat Shahar Peer for the loss of only three games and immediately withdrew from the rest of the tournament with a shoulder problem.

Williams was due to meet Azarenka in the semi-finals, having beaten her in the Madrid final last week. Now the only seeds she can face in the semis are either No8 Li Na or No14, Dominika Cibulkova.

Meanwhile, the world No2 Maria Sharapova, against whom Williams has one of the longest rivalries, will have to negotiate No13 Ana Ivanovic, followed by either No5 Sam Stosur or Venus Williams—and that’s before she even reaches the semis.

It’s not a dissimilar story for Federer. Indeed, a quick look at the men’s draw shows that things are unfolding in a very unbalanced way for the top four.

No2 Rafael Nadal has seen just one seed fall, fellow Spaniard Feliciano Lopez playing on his least successful surface. Tomas Berdych and Nicolas Almagro fight for the privilege of a quarterfinal meeting with him.

In Nadal’s other half, No4 Andy Murray shows his section still full of threats: first Richard Gasquet, then either Gilles Simon or David Ferrer. It’s a formidable scenario for the British man.

Meanwhile, in the top half of the draw, No1 seed Novak Djokovic’s section is also still intact: Juan Monaco, Juan-Martin del Potro and Jo-Wilfried Tsonga. That’s before he contemplates a Federer semi-final.

And Federer, still acclimatising to Rome’s slower red clay and stretching out his tired muscles, is the only seed left in his quarter. His first late-night opponent, Juan Carlos Ferrero, has not beaten him since 2003. One of those lined up in the quarters, Andreas Seppi, has never beaten him, and the other, compatriot Stan Wawrinka, has beaten him only once, but not for eight straight matches.

Of course all this may count for nothing. Federer came into Rome the last two years with fewer matches in his legs and did not make it past the third round.

But for the moment at least, Williams and Federer may feel that the Roman gods are smiling on two of their oldest campaigners.