In his first match in Rome, Roger Federer’s tennis reflected the fast-changing weather like a barometer 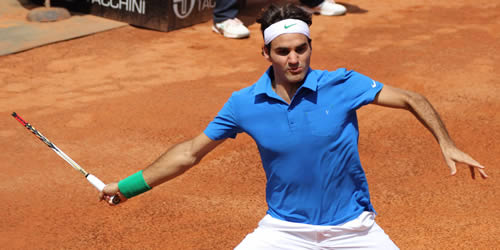 Roger Federer is not usually regarded as a player easily affected by the vagaries of intemperate weather.

The calm Swiss is the one often described as a “good wind player”, was the one who seemed to adapt readily to Madrid’s flurries of clay, and was not unduly affected by the chilly showers that engulfed Indian Wells.

Yet in his first match in Rome, Federer’s tennis reflected the fast-changing weather like a barometer.

His first touch of red clay this year, barring a couple of short knocks at the Foro Italico since he arrived this week, came in his opening match in Rome. So he and the packed afternoon crowd on Centre Court might have anticipated a slow start.

All the more so because of how the Rome conditions compared with the slippery, fast blue stuff in Madrid: “It is so much slower here than in Madrid and so it takes a lot of adjusting to.”

And all the more so because he would not finally commit to playing in Rome until he was sure that his physical recovery from the punishing blue clay was good enough.

Little did that Centre Court crowd know just how late he left his decision: “Until this morning after practice. I just wanted to see how I felt and if there was anything major.

“If this was the last tournament of the season, then there would be no problem but we have a long summer ahead.”

Yet when he opened against the No38-ranked Carlos Berlocq, who reached his first tour final this year in Vina del Mar, Federer played pitch-perfect tennis to take a 3-0 lead for the loss of just one point.

The sun shone, the dust floated, and the heat shimmered from the walkways while he attacked the net, on the Berlocq serve as well as his own, and found an early groove with his forehand.

Federer faced one break point in the seventh game, saved it with a down-the-line winner, and went on to serve out the closing game of the set to love, 6-3.

But two new factors came into the equation.

Berlocq had reached his current ranking—a career high—on the back of a string of tournaments on red clay. After Chile came quarter-finals in Brazil, Argentina, Mexico and then in Houston, so he knew his way round this kind of court.

And then the wind, by now swirling with a vengeance, swept banks of grey clouds across the arena. A court that had glowed like a sandy beach in the opening games now turned deep orange in the gathering shade. The Federer forehand cooled down, too, and he started to miss as many lines as he hit. He returned to his net-attacking tactics of the first set to earn a break point in the fifth and took the lead 3-2 but, as the rain began to fall, he himself went 15-40 down.

It’s rare for such distractions to affect the Federer concentration, and sure enough he levelled to deuce. But amid the bustling and shuffling of coats and umbrellas, Berlocq pounced with a winning drop shot followed by a cross-court winner to get the break back.

Then, as if on cue, with the set approaching the seventh game, the clouds continued on their journey across Rome to leave the sun in their wake.

Just as quickly as the ranked spectators had pulled on their coats, they discarded them and donned their sunglasses. And just as quickly, Federer’s game heated up.

A love hold of serve took him to 4-4 and a string of winners—in particular from the off-forehand—took him to 40-0 and three break points. He failed on two but won the third to leave himself in that best of all positions. With the sun on his back, he served out the match just as he had started it, 6-4.

Federer will, no doubt, be relieved to get his first taste of Rome’s best and worst out of the way and settle into the meat of a Masters he has yet to win. And if the issue of his ranking going into Roland Garros has occasionally diverted him, he was not going to admit it:
“I have a good win under my belt and I might be No3 next week, but that doesn’t matter for me and Rafa…I wouldn’t even know how many points I am right now. That kind of thing I stopped checking a long time ago.”

So he probably does not remember that the last time he played Juan Carlos Ferrero, one of his oldest colleagues, back in 2007, he was No1 and the Spaniard was No19—though Ferrero, too, had enjoyed the No1 ranking back in 2003.

Since then, their paths have diverged, with Ferrero dropping outside the top 100 on two separate occasions. But when they meet, under the Centre Court lights tomorrow night, it will be no less a pleasure to watch for that.

Rome Premier: How do you solve a problem like Serena?