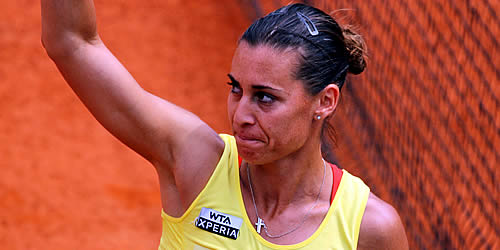 What a time the home city had on third-round day in Rome! If the courts in the Foro Italico had roofs, there is no doubt that the cheering, Mexican-waving, hearts-on-their-sleeves Italian crowds would have raised them.

This unbounded joy has been in celebration of not one winning star but two—well five if you take in the doubles draw as well. And what has made the success doubly thrilling is that both the singles players are unseeded.

Look to the women first. Flavia Pennetta has been on the tennis tour for almost a dozen years and, now 30 years old, she still seems to improve. Yet she is possibly best known for her outstanding record in doubles—with Gisela Dulko, she was IFT and WTA doubles player of the year in 2010—and as a staunch member of the shining Italian Fed Cup team that has won the title three times: in 2006, 2009 and 2010.

She did not break into the singles top 10 until 2009, the first Italian to do so. Then in 2011 she made more headlines when she became only the second player to beat the singles No1 and doubles No1 on same day—in Beijing she beat Caroline Wozniacki and the Huber-Raymond doubles team.

This year in Rome’s singles draw, she has equalled her best result here—set in 2006—in her third quarterfinal of the year. On each of the previous two occasions, she went on to be runner-up in Auckland and Acapulco.

Her run to the Rome quarters was outstanding, too. Her first victim was No16 seed Maria Kirilenko in straight sets, and her subsequent two matches were won for the loss of just six games. But then the task became altogether tougher. She had lost to Serena Williams in both their previous meetings, though both times on hard courts. This was to be their first time on clay and, what may have surprised many was that Pennetta led Williams in the ace tally for the tournament by 11 to 9.

But then for Pennetta, disaster struck. Just four games into the match—four straight games to Williams—the Italian had to retire with a wrist problem. The crowd cheered her as though she had won, and Williams clapped her appreciation of an outstanding tournament. Neither will give Pennetta much consolation though the prospect of breaking back into the top 20 next week may alleviate the pain just a little.

Meanwhile, she remains just six wins away from her 500th career victory and, to add salt to the wound, she was also unable to take up her quarterfinal place in the doubles with another much-loved Italian, Francesca Schiavone.

The pair was due to play straight after another Italian pair, Sara Errani and Roberta Vinci, had done their stuff. They were scheduled on the all-access centrepiece of the Foro Italico which represents the heart and soul of the tournament—Pietrangeli is still overlooked by the tournament’s iconic white statues. Though missing Pennetta and Schiavone, the other Italian pair did indeed advance to the semis.

But Pietrangeli was, as so many times before, the centrepiece of another drama for the only unseeded man in the singles draw, Andreas Seppi. The sun was already low in the sky but the temperature hit the heights as the Italian fought through three hours 20 minutes to beat Stan Wawrinka and seal a quarterfinal place against another Swiss, his good friend, Roger Federer.

Seppi, who has never advanced past the second round in Rome in seven previous appearances, became the first Italian to reach the quarters since Filippo Volandri was a semi-finalist five years ago. What’s more, he did it the hard way, fending off six match points in a three-tie-break victory.

It seemed only right that Seppi’s achievement should go down in the record books, and it became was the first time since the tie-break was introduced at the tournament in 1971—more than 2,500 singles matches—that all three sets were decided in this way.

In contrast with compatriot Pennetta, Seppi reached the quarters in the toughest possible way—but in highly impressive form. His previous two matches were also won in three sets, and against No9 seed John Isner, he also came back from a set down to win a tie-break and then a 7-5 final set.

It has earned him a place on the tournament’s stats tables that he may come to rue when he joins forces for the ultimate test with Federer. Seppi tops the leader board of longest matches for his Wawrinka marathon, but also claims third and seventh for his other two matches.

But although Seppi has not beaten Federer in their other eight meetings, he has tested him more than once. Back in their first encounter—tellingly on the clay of Monte Carlo—Seppi took the match to two tie-breakers. And in their last match, in Doha this year, he took a set off Federer for the first time.

Federer talked of how much he looked forward to playing his friend—and to the carnival atmosphere their match would enjoy on centre court—but also revealed the apprehensive he had felt in their last match about the back problem that forced him to withdraw before his semi-finals in Doha: “I was scared.”

Now, he added, he opted into the Rome Masters at the last moment because he was “playing pain-free.”

He will need to be, especially as he talked of still making adjustments to the red clay in his three-set win over Juan Carlos Ferrero. For he will be playing a man with the majority of the 12,500 capacity crowd cheering on his opponent—a rare experience for one of the most popular players in Rome.