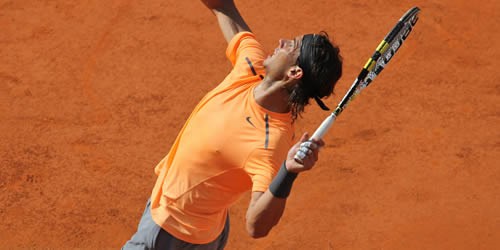 On bad days, David Ferrer must wonder what he did in an earlier life to deserve being born exactly 30 years ago into a Spain that would soon deliver Rafael Nadal to the tennis world.

Were it not for possibly the most outstanding of clay-court players ever to pick up a racket, Ferrer may already have won a Masters title on clay, but Nadal beat him in the finals of Monte Carlo last year and in the semis in 2010. He also beat Ferrer in the Rome finals in 2010 and in the semis in 2005.

Were it not for Nadal, he may have won his home tournament in Barcelona rather than losing four times in the final to his illustrious compatriot.

Were it not for Nadal, Ferrer may have become Spain’s No1 years ago but, as it is, he broke into the top 10 after Nadal was already second in the world to Roger Federer.

Ferrer has been one of the most consistently high performers on the tour, one of the hardest workers, a busy, no-nonsense player who has spent only six weeks outside the top 20 since August 2005. And yet he has forever been the bridesmaid in Spanish tennis while Nadal has walked down the aisle to victory in the Eternal City in five of his seven previous appearances.

Nadal had taken a while to acclimatise back to the red clay after an unhappy tournament on the blue stuff in Madrid but, in beating No7 Tomas Berdych—himself a finalist in Madrid—in straight sets, he looked as good as he had since winning the French Open last summer. It was so good, even Nadal himself was pretty impressed:

“I played one of my best match on clay against a difficult opponent. It was a big match and one of the higher quality matches this year because the level of the opponent is high…I did something fantastic …and my movements were fantastic. I hit a few fantastic shots and this kind of shot comes with the confidence.”

From Nadal, normally reluctant to praise himself above his opponent, that was a notable comment.

All in all, then, the prospects were not bright for Ferrer: In short, it was hard to see Nadal failing to reach his 38th straight clay-court semi-finals—the first was in Umag in way back in 2003.

For the first hour and half, however, it looked as though the bustling, hustling and spirited tennis of Ferrer may finally punch a hole through the Nadal game. The No2 seed defended break points on his first service game and had to do the same on his next, too, as Ferrer kept his opponent swinging from backhand to forehand sides with depth and angle. It paid off and, already half an hour into the match, Ferrer scored the break to lead 3-1.

But his only break of the match would be short-lived. He made two forehand errors and finished the fifth game with a double fault to hand the break back.

Still Ferrer pressured Nadal and had more break chances in the eighth game but could not quite score the killer blow when it counted. With an hour on the clock, they were all square, but as they headed towards a the tie-break, the balance of power still seemed to be with the smaller, older Ferrer: He held serve strongly and earned yet another break point in the 12th.

But the vicious forehand down the line that had powered through the Berdych game the day before came to Nadal’s rescue and they had to take each other on like prize-fighters on clay.

Again Ferrer took the first advantage, a 3-1 lead on his own serve, but a couple of fatal errors visibly infused Nadal with confidence. The two men stayed level to 6-6 but a cross-winner on the line from Nadal and an overhit forehand from Ferrer closed out the set.

As it was, the Nadal floodgates opened. Once he had fended off deuce on his first service game, he took a 40-0 lead on Ferrer’s serve with two cross-court and one drop-shot winner. He broke and went 40-0 ahead on Ferrer’s next serve too. This time, it took seven deuces to decide the outcome and it was, again in Nadal’s favour.

In fact Ferrer would not disturb the scoreboard again as Nadal romped home in a clinical 6-0 set.

The final scoreline does not do any favours to Ferrer, as this was a close, finely-balanced battle, and it took Nadal exactly the same time to win—2 hours 6 minutes—as it had taken him to beat Berdych in the rather more acceptable scoreline of 6-4, 7-5.

Ferrer was asked what he could do next time to make the outcome a different one, and he shrugged: He would work harder, and hope to play even better at Roland Garros, but he added that Nadal, with Novak Djokovic and Roger Federer were, quite simply the best.

Nadal now has just one more match to win to reclaim the record of Masters titles with 21. In his way will be one of the two men who Ferrer put in the same category as his Davis Cup team-mate.

It will be Djokovic and Federer who fight it out in the cool of Saturday’s Rome evening for the dubious pleasure of taking on a frightening confident looking Nadal in the Sunday afternoon heat of the Rome final. Nadal did not care which of them it would be: “It’s more important to win Rome than to beat Novak or Roger.”

No doubt it is the same view of things that Novak and Roger will have, too.

Semi-final report: Djokovic steps it up to defeat Federer in semi