Marianne Bevis takes a look at the men's draw of the Rome Masters, where Novak Djokovic is looking to defend his crown 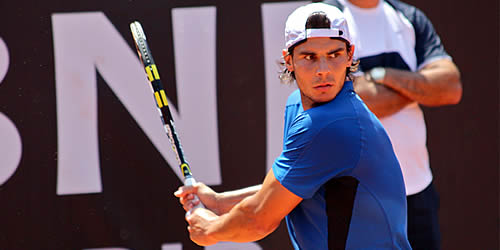 Go back a decade in this illustrious, historic tennis tournament and the honours board is dominated by an exclusive set of men who are still contesting for the title in 2012.

The oldest of them, Juan Carlos Ferrero, champion in 2001, has already taken his first step with a first-round win over the higher-ranked Kevin Anderson.

Move on to 2003, and Roger Federer was runner up, and he then came close to winning in 2006. He lost that five-set battle—three of them in tie-breaks—to the man who would come to dominate the Eternal City, Rafael Nadal.

In 2004, former world No3 David Nalbandian was runner-up but, since then, Nadal has won five times and defending champion, Novak Djokovic, twice. And in two of those seven finals, the other man was runner-up.

Widen the net to take in the Masters of the last year and still very few others have broken the stranglehold at the top of the men’s game. In 2011, all nine Masters were won by one of the top four—Andy Murray winning the two titles that Federer, Nadal and Djokovic had failed to win since the start of last year.

Between those four, there are currently some interesting rivalries to revisit during the last minute jostling for position before the culmination of the clay season at the French Open.

In Madrid—whose blue shores have overlapped onto Rome’s golden clay—the fast and slippery conditions saw Nadal and Djokovic leave early but saw Federer thrive. Not only did he score his first title on clay since Madrid and Roland Garros in 2009 but he returned to No2 in the rankings for the first time in over a year.

Federer also comes to Rome in the knowledge that he has beaten every other man in the top-10 in their most recent matches—except Djokovic, against whom he suffered perhaps his toughest loss of 2011 at the US Open. And as luck would have it, the draw has thrown these two into the same half.

But the Italian clay is a different animal from the Madrid kind. Federer has yet to win the Rome title—and lost early in the last two years—and he has played no tennis on the traditional red stuff this year. In contrast, multiple champion Nadal will be buoyed up by his clay titles in Monte Carlo and Barcelona, and particularly so by his win over Djokovic in the former.

The Rome courts are close in playing quality to those of Roland Garros and so they are as good a guide as any to who may take Paris. So is there anyone else that Nadal has to fear as he begins his campaign to Master Rome for a sixth time?

The title-holder will open against the youngest man in the draw, Bernard Tomic, who scored a useful win over Acapulco semi-finalist, Santiago Giraldo. Tomic also happened to break into the public consciousness in his only meeting against the top seed, taking a set from the eventual champion at last year’s Wimbledon.

Djokovic’s first seeded opponent, Juan Monaco, is returning from the ankle injury he picked up in Monte Carlo where he was enjoying a run of two clay titles. He has been hitting the practice courts with a vengeance this week, too, so could give Djokovic a good work-out in the third round. First, the Argentine has a testing second round against Radek Stepanek, the oldest man in the draw.

Djokovic’s biggest challenge should be a quarter-final against another in-form Argentine, Juan Martin del Potro, who lost, just, to Tomas Berdych in the Madrid semis. Del Potro, though, won in Estoril the week before and is back in the top 10 this week.

But the Serb has won both their previous matches on clay, including here in 2009. What’s more, Del Potro has a testing run via two flair players—first Michael Llodra and then Mikhail Youzhny—plus Jo-Wilfried Tsonga in the third round, before he can fulfil that quarter-final Djokovic appointment.

Federer’s draw looks a little less daunting in its early stages than his last three tournaments have done: Twice he faced the dangerous Milos Raonic, who took the first set, and in Miami, Federer lost to Andy Roddick in his second match.

The Swiss first faces Carlos Berlocq, who had some useful wins in the South American swing, and either former champion Ferrero or Gael Monfils.

Federer and Ferrero have not met since 2007 and the Spaniard has not beaten Federer since 2003, so that would be a trip down memory lane.

Gael Monfils, twice a finalist this year despite playing few events, made a strong opening in Rome against Alex Bogomolov Jr and looks in fine form.

In the quarters, Federer should meet either Janko Tipsarevic, who he beat in the Madrid semis, or the winner of an intriguing opener between the talented German with a similar single-handed backhand, Philipp Kohlschreiber, or John Isner, who has a Davis Cup win on clay over Federer this year.

Another single-handed backhand in this bottom section also has the potential to take out Tipsarevic: Stan Wawrinka battled through a good three-setter against Robin Haase. It’s even possible for the two Swiss men to meet in the quarters—and the only time Wawrinka has beaten his compatriot was on Monte Carlo’s clay in 2009.

Murray has yet to reach the final of a clay tournament but feels he is getting closer: “I think I am better than at the same stage last year…and have come in with a lot more confidence.”

He came close to beating Djokovic in the semis here last year, too, and in their three meetings so far in 2012, Murray won in Dubai and pushed Djokovic to five sets at the Australian Open.

Murray missed Madrid with a minor back problem but comes fresh and fit to Rome. Nevertheless, he faces a sequence of potentially dangerous men who can all produce the goods on clay.

The 30-year-old Nalbandian is first up, and he has had some good results this year: the quarters in Sao Paulo and Indian Wells and the semis in Buenos Aires. However, Murray has a winning record over him, including their last four matches.

The third round holds one of two former top-10 players, Jurgen Melzer and Richard Gasquet. And the top of the Murray section contains arguably the most dangerous man on clay outside the top four, David Ferrer. The Spaniard has two clay titles this year and was beaten by Nadal in a tight Barcelona final. Ferrer, though, has to beat Fernando Verdasco, who comes to Rome fresh from beating Nadal for the first time in Madrid. That promises to be one of the matches of Round 2.

It looked, at first sight, as though Nadal had drawn the short straw for his first match in the shape of Raonic, but the fast-rising Canadian, who beat Murray in Barcelona, was beaten in his opening match by the unpredictable talent of Florian Mayer.

The rest of Nadal’s section features several fellow Spaniards, none of whom has beaten him on clay. His first compatriot victim is likely to be Feliciano Lopez but Nadal may well not play the next Spaniard in line, Nicolas Almagro. The more likely man to contest the quarters with Nadal is the surging Tomas Berdych, who was a finalist in Madrid and a semi-finalist in Monte Carlo.

And Berdych’s chances against Nadal? Well, Italian clay really is a different animal from the Madrid kind. As Nadal stressed in his opening press conference: “The blue clay is past…my goal now is Roma, and I don’t think about blue clay, I think of Roland Garros.”