Rome Premier: How do you solve a problem like Serena?

Serena Williams has already passed her first two tests in Rome where, as No9 seed, she has to play the opening round 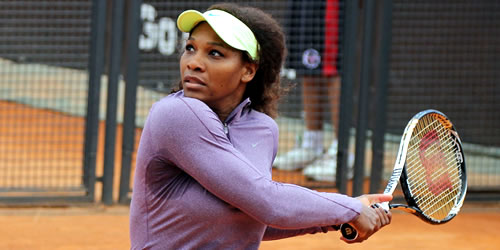 Serena Williams is currently ranked No6 in the world Photo: Marianne Bevis

That is, of course, not quite how the song goes. But in the battle of wills between Serena Williams and tennis’s Maria—Sharapova—it is the former who has become the insurmountable problem, though not just for Maria.

Second seed Sharapova is in Rome to defend the title she won last year. This time, though, she finds the formidable Williams in the draw—and there lies the problem.

Both women, multiple Grand Slam winners, former No1s and with 2012 titles to their names, arrive here fresh from a quarter-final meeting in last week’s Madrid: Williams beat her long-standing rival—they first played in 2004—for the loss of only four games.

It was a tour de force, and not for the first time. Ten times they have met, eight times Williams has won, and for seven matches in a row.

Williams went on to take the Madrid title for the second time by beating the current world No1 and the WTA’s most recent Grand Slam winner, Victoria Azarenka, in exactly the same score as her Sharapova win.

The way that the draw in Rome has unfolded, Williams will have to do the same again, for she finds herself in Azarenka’s half. She was also, tellingly, scheduled to meet Caroline Wozniacki in the third round—and the Dane gave Williams far more trouble in their first meeting on clay than the top two seeds did. She also beat Williams a few short weeks ago in Miami so Williams may be relieved to see that particular woman retire sick in her first match.

Williams’ exploits on grass and on hard courts are the stuff of legend: At 13, she has more Grand Slams than any other active player, sixth on the all-time list. But one of those Slams came in Paris and her clay credentials, not to mention her current form, must give every other woman nightmares as they head to the French Open.

The final of the Madrid tournament brought up her 13th straight match win and took her run to a 22-2 win-loss record this year, including 13-0 on clay. Her other title this year came on the green clay of Charleston and, if her opponents are lulled into the belief that the red clay will suit her less, they need only remember that she won this title a decade ago and has been a semi-finalist three times, including at her last appearance in 2010.

As if all this was not enough to intimidate and to admire in a woman now in her 31st year—her 15th year on the tour—she has, to quote another song, done it her way, and often against real adversity.

Take the last two years. She returned to the Australian Open and Wimbledon in 2010 as defending champion and won both of them. Yet she played only four other events that year, missing the clay season with a knee injury and the entire season after Wimbledon with a seriously cut foot.

That injury went on to prevent her from defending her Australian title in 2011, but worse was to follow. A pulmonary embolism hospitalised her in the spring and that delayed her return until almost a year after her grass victory in London.

She still reached the fourth round at last year’s Wimbledon, looking as fit and strong as she had in winning it the year before.

She then went on a hard-court spree of back-to-back wins in Stanford and Toronto and immediately became the favourite for New York, but her lowly seeding of 28 made her route a difficult one.

Nevertheless, she progressed with ease, pausing for one tiebreak against No4 seed Azarenka before taking out No16 Ana Ivanovic and top seed Wozniacki without dropping a set.

Few expected Sam Stosur to fare any better, but when Williams lost her cool at the start of the second set—having lost the first—the rest was history: Stosur became the year’s third first-time Slam winner.

Once again, Williams did not play for the rest of the year for health reasons and played just three tournaments this year before the clay season got under way.

If she can record such a 23-2 win-loss run after a two-year spell like that, who knows what she can serve up for 2012?

She has already passed her first two tests in Rome where, as No9 seed, she has to play the opening round. If anyone doubted her drive and ambition to win this title, her comeback from a set down against the fire-power of Nadia Petrova in difficult windy conditions should certainly banish them. There are two more hurdles before the Azarenka and Sharapova challenge can be replayed, but it would take a brave woman to bet against Williams being there.

For who would count out this remarkable athlete from having another historic—perhaps even record-breaking—year? And, lest her opponents forget, there is still one title missing from her CV that will certainly focus her steely will: a singles gold at the Olympics.

For the four-time Wimbledon champion, winning that particular prize this year on that same grass, would taste especially sweet.