Collymore, Given and more: Twitter reacts to Dalglish’s sacking 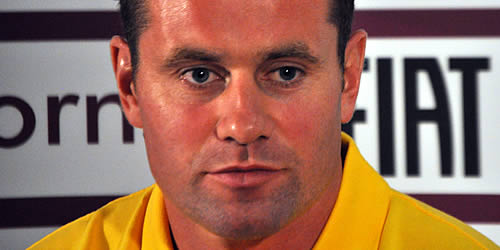 Shay Given described Kenny Dalglish as one of “best managers” the Republic of Ireland goalkeeper has worked with after the 61-year-old’s sacking by Liverpool on Wednesday.

Here, we take a look at some more reaction from Twitter following Dalglish’s dismissal.

Aston Villa and Republic of Ireland goalkeeper Shay Given: “Sorry to hear @kennethdalglish has lost his job at Liverpool. One of the best managers I’ve worked under.

Ex-Liverpool striker Stan Collymore: “Would a top class manager go to Liverpool? Form is temporary,class is permanent. One of a handful of global big boys. That’s the truth. Rijkaard,Van Basten would be good. Big men who’ve lived and breathed the big expectation Liverpool need this. Can’t gamble on maybe’s anymore. If FSG are serious Guardiola, Capello, Hiddink should be the calibre they are looking for. Martinez/Rodgers/Lambert absoulutely not for #lfc”

Former Wales international John Hartson: “The Liverpool hierarchy are a disgrace sacking Kenny Dalglish – delivers a trophy and was inches from taking his team to extra-time in the FA Cup final and is king on Merseyside. Ok league position not Liverpool-like but who on earth will improve on them stats next season? Terrible decision and I bet there are lots of worried Liverpool fans out there.”

Former England cricket captain Michael Vaughan: “Apparently it took @GNev2 one second to rule himself out of the Liverpool job…”

To which Manchester United legend and England coach Gary Neville responded: “@VaughanCricket: Apparently it took @GNev2 1 second to rule himself out of the Liverpool job…..” You causing trouble Michael!!”

Celebrities have their say:

Comedian and Liverpool supporter John Bishop: “Very disappointed – I think Kenny deserved another year. The owners have given themselves a major challenge to replace him. Very difficult to see how LFC can move forward and remain the same club, owners too ready to hire and fire – we are the new Chelsea!”

Westlife singer and Manchester United fan Nicky Byrne: “Gutted for King Kenny. Should have given him more time. Liverpool used to have faith in managers now they’re as bad as Chelsea and I’m a United fan!”

Chelsea’s Gary Cahill: I want to make up for FA Cup final ‘sickener’