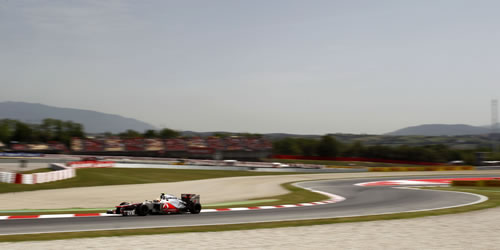 McLaren’s Lewis Hamilton has been stripped of pole position and sent to the back of grid for Sunday’s Spanish Grand Prix.

Hamilton stopped his car out on the track following his pole-winning lap having run out of fuel.

The Formula 1 rules state that all drivers must provide a sample of their fuel to be tested for irregularities when they return to the pits.

The stewards rejected McLaren’s arugment that the occurence was ‘force majeure’ and their decision sees Williams driver Pastor Maldonado move up to take his first ever pole position in F1.

The stewards’ ruling said: “A team member had put an insufficient quantity of fuel into the car, thereby resulting in the car having to be stopped on the circuit in order to be able to provide the required amount for sampling purposes.

“As the amount of fuel put into the car is under the complete control of the competitor, the stewards cannot accept this as a case of force majeure.”

A McLaren statement said: “We accept that the stewards did not agree with our interpretation of force majeure. Our aim is now to maximise the points we can score.”

In a busy afternoon for the stewards, they accepted HRT’s request for special dispensation for Narain Karthikeyan to start the race.

The Indian had not made the 107 per cent cut-off point of the fastest time set in Q1. They cited that Karthikeyan’s time in FP3 was within the 107 per cent zone and representative that he would not be dangerously off the pace in the race.