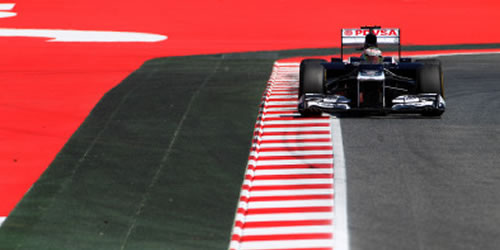 The 27-year-old becomes the first Venezuelan ever to win a race and the first Williams driver to secure victory since Juan Pablo Montoya took the flag in Brazil in 2004.

Maldonado’s victory ensured that five different drivers from rival teams have won the opening five races of the season.

He said: “I think it’s a wonderful day, not just for me but the team. We’ve been pushing so hard to improve since last year and here we are.”

“It was my first pole and first win and you can imagine what I am feeling.”

After inheriting pole position due to Hamilton being demoted to the back of the grid for breaking the rules on fuel sampling, Maldonado was beaten to the first corner by Alonso.

The Spaniard led the first stage of the race but a combination of quick laps from Maldonado – and Alonso being held up while lapping backmarker Charles Pic – saw the Venezuelan overtake in the pit stop phase.

Pic’s role in the change of lead saw the Frenchman awarded a drive-through penalty for ignoring the blue flags to allow a faster car through.

A game of cat-and-mouse ensued, with Alonso closing the gap to less than a second without looking likely to pass, before backing off in the final laps.

Raikonnen, who jumped his team-mate at the start, was closing the leading pair down at a rate of knots late in the race after managing to make his penultimate set of tyres last longer.

The Finn almost reaped the rewards of fresh rubber right until the end of the race as Alonso and Maldonado managed their tyres to ensure they made the finish.

However, a slow first phase of the race cost Lotus. Raikonnen said: “I’m a bit disappointed. I expect to be a bit stronger in the race, especially at the beginning. At end of the race, we were good but it was too late.”

Hamilton’s drive to the points was no mean feat, given that he was the only driver on a two-stop strategy after starting 24th.

He said: I am proud of myself and the team. We did a good job to come all the way from the back, we battled through and conserving the tyres was tough.

“Considering everyone keeps telling me that I am hard on tyres and how much smoother my team-mate is, I think that should show them that maybe they’re wrong.”

Both Vettel and Red Bull team-mate Mark Webber made the unusual move of changing their entire front wings in the race, with no obvious damage to either car. Webber eventually finished 11th.

Michael Schumacher’s worst ever start to a season continues, after crashing into the back of Bruno Senna in an incident which took both drivers out of the race.

Another driver who struggled again was Ferrari’s Felipe Massa, who finished a lowly 15th, only ahead of the far slower Caterham, Marussia and HRT cars.

Force India’s Paul di Resta is the latest driver to be linked to the second seat at Ferrari as Massa continues to struggle having scored just two points so far this year.

The stewards had a busy afternoon, issuing drive through penalties to both Vettel and Massa for failing to slow down under waved yellow flags as debris from the Senna-Schumaher crash was cleared up.

Vettel and Alonso are now tied at the top of the championship standings, ahead of Lewis Hamilton in third.

Red Bull lead the constructors’ standings ahead of McLaren and Lotus, while Maldonado’s win sees Williams move level with Mercedes on 43 points.