Steven Oldham looks back at the main talking points after an historic Spanish Grand Prix, where Maldonado clinched victory 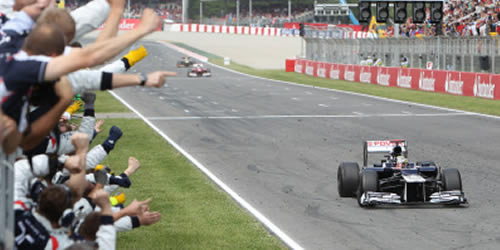 Maldonado has come of age

Pastor Maldonado’s stunning drive to victory in Barcelona completed a remarkable turnaround for the Venezuelan. Dismissed by many last year as a pay driver – one that brings more money into a team through sponsorship than he costs them – in a tumultuous year for Williams after scoring just one point all season and struggling to outpace the backmarkers in some races. Despite the obvious benefits of bringing in valuable oil money, renewing Maldonado’s contract could prove an astute deal by Williams. His driving this year has markedly improved, as shown in Australia when chasing down two-time world champion Fernando Alonso before making a costly mistake and crashing out. In spite of this error earlier in the season, Maldonado dusted himself down to put in stunning performances through all three qualifying sessions in Barcelona and deservedly took a front-row spot. Lewis Hamilton’s demotion to row 12 after being stripped of pole position no doubt helped Maldonado’s quest, but given his performance on Sunday, he would have challenged Hamilton all the way. Given the competitiveness of the Williams car this year, it would be unwise to bet against him adding to his victory.

There is no doubt that Michael Schumacher is a Formula 1 legend. However, the German – currently enduring his worst ever start to a season with just two points from five races – is clearly struggling to compete with arguably the most talented grid of drivers he’s faced in his career. The days of the 43-year-old dominating the sport are long gone. He is still capable of flashes of brilliance, such as his second-place in qualifying in the Chinese Grand Prix but he has little to show for it, with two tenth-place finsihes in Malaysia and Bahrain with three retirements. He blamed Bruno Senna for the incident that took both drivers out of the race in Barcelona on Sunday. He ludicrously tried to point the finger at Senna having known the Brazilian was on much older tyres when coming for the overtake, and the speed Schumacher took into turn one was reckless. It’s not as if Senna was being lapped either as they were racing for position at the time, meaning the Brazilian was completely entitled to defend his place. For Schumacher to blame Senna, who most people view as the passenger in the incident, was surprising to hear and the stewards at least made the correct decision in giving him a grid penalty for Monte Carlo.

Williams success is good for the sport

No-one enjoyed watching a legendary team such as Williams sinking as low as they did last year. Five points for a season is a dreadful return for a team involved in championship wins and battles perennially. To turn around the team’s fortunes in less than 12 months is nothing short of remarkable, given that a year ago in the corresponding race, Maldonado and Rubens Barrichello finished a miserable 15th and 17th respectively. In joining the likes of Ayrton Senna, Nigel Mansell and Damon Hill on the list of Williams race winners, Maldonado has brought the team’s success to a whole new generation of F1 fans. Eight long years without a victory has been remedied by Sunday’s result and it is doubtful anyone in the pit-lane will begrudge the team their moment of glory. The outpouring of goodwill to the team following the pit-lane fire shows how highly thought of Williams are – would McLaren be as quick to offer help to Ferrari or Red Bull?

The 107 per cent rule needs to be enforced more

HRT’s Narain Karthikeyan posted a time outside of 107 per cent of the fastest time in qualifying on Saturday, so therefore did not qualify under F1’s own rulebook but was still allowed to take part in Sunday’s race. If a driver fails to post a time within this generous margin – in real terms, typically five or six seconds – they should not be allowed to race. Allowing teams to appeal to the stewards and race anyway makes a mockery of this rule. If the same scenario was applied to football, a team hurtling towards relegation would appeal to the league for them to be allowed to stay in anyway. It certainly wouldn’t happen there and shouldn’t in F1 either. Tightening up on this rule would encourage teams at the back end of the field to up their game for fear of not being able to race, and make the sport more competitive. Allowing them to race when they’re not quick enough doesn’t force the backmarkers into making improvements to get closer to the field.

Räikkönen has the hunger for Formula 1 again

Given his form this season so far, it appears a sabbatical has done Kimi Räikkönen the world of good. The Finn has the hunger for the sport back after his two years rallying, proven by his disappointment by not winning in Spain. In hindsight, Räikkönen probably made the best decision in 2009 to try something new, for he has returned reinvigorated for the challenge. He has firmly established himself as the leader at Lotus ahead of the pacey but unpredictable Romain Grosjean. With two podiums in as many races, he is sitting pretty in the title standings – probably above his own expectations for the comeback. With F1 as unpredictable as it is at the moment, it would be hard to bet against Räikkönen winning a race before the season’s out if his team are able to continue their presence near the front of the pack.