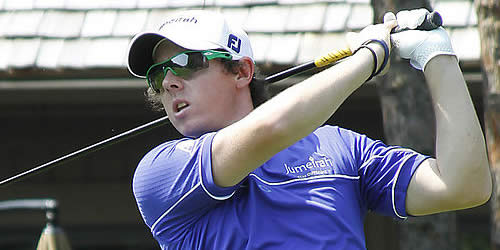 Can Rory McIlroy continue his good form this week? Photo: Ed, via Wikimedia

McIlroy will be confident coming back to Quail Hollow, the site of his first PGA Tour win and his final round 62. The 22-year-old had an amazing season last year but has managed to improve in 2012. Not including his poor showing at the Masters, McIlroy has finished in the top 10 in every event he has played in. He has already won this season at the Honda Classic and will be looking to replicate some magic like he did two years ago.

Despite Woods not being in the best of form at the moment, he can never be counted out of any tournament. The 14-time major winner had a poor showing at the Masters and will be looking to put the tournament behind him with a win.

Arguably the form player coming into this season, with two wins from the WGC Accenture Match Play Championship and the Shell Houston Open. He is the second-highest ranked American player. Mahan has a silky smooth swing and a solid putting stroke, and his last four visits have resulted in top-25 finishes.

The 41-year-old is having a great season. He won the AT&T Pebble Beach Pro-am, lost in a play-off for the Northern Trust Open and had a good opportunity to add a fourth green jacket to the wardrobe. Mickelson is always a player to watch and although he has never won at Quail Hollow he is unbelievably consistent at the course. In eight previous visits he has only finished lower than 12th and was runner-up two years ago.

Furyk is a previous winner and runner-up at the tournament and has come into form recently. In his last four tournaments he hasn’t finished lower than tied-11th and he finished second in the Transitions Championship.

Heineken Cup: Leinster’s Brian O’Driscoll delighted to be back