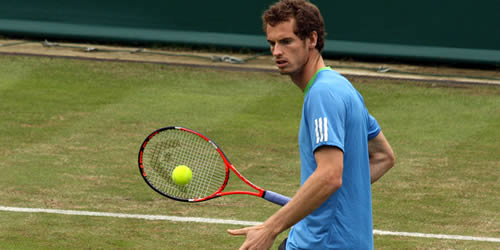 Andy Murray may have left the clay of Paris a little earlier than hoped, but a tough draw and less-than-perfect physical condition certainly did not help his cause on a surface that he finds challenging even on the best of days.

No surprise, then, that the first question he faced from his closer-to-home tournament at The Queen’s Club—home of some of the most celebrated grass courts in the world—was about the back problems that have troubled him throughout his clay campaign.

And considering he pulled out of the Madrid Masters, and was then in some pain in Rome where he lost to Richard Gasquet, the signs are now much happier.

“I felt pretty good the last few matches I played at the French Open but I managed to get a couple of days off, which I really needed for my back—and it’s felt much better. I’ve had a couple of good practices on the grass and it’s felt fine.”

Asked about his quarter-final loss in Paris to David Ferrer, he was also pretty upbeat:

“I think I went really well considering how it started out. I wasn’t feeling particularly well obviously after my second round match…quarter-finals for me on probably my least favourite surface is not terrible. I would have liked to have done better but it was OK.”

Murray comes to the Aegon Championships at Queen’s as the defending champion and bidding to win the title for the third time in four years. And although Rafael Nadal has defected to the only other grass tournament played in the post-French Open week in Halle, Germany, Murray faces a strong, 56-man draw that includes the man he beat in last year’s final, world No5 Jo Wilfried Tsonga.

On paper, the same two men—as top seeds—are lined up to compete for the title again, and both talked of their love not only of grass but also of the London club.

For Murray, his affection dates back to his first match on the ATP tour: “I’ve always enjoyed playing here. I like the surface, the courts here are pretty much perfect grass courts and I have great memories.

“I won my very first ATP match here when I was 18 and since then I’ve just really enjoyed coming back. I’ve won Queen’s a couple of times and I’ve always liked playing here.”

“In the final, I had two match points, and I remembered that in my match last week [against Djokovic]. Anyway, on the court I had some bad memories but outside the court all the time I have good memories…everyone here is always really nice with me and I like the city so much. 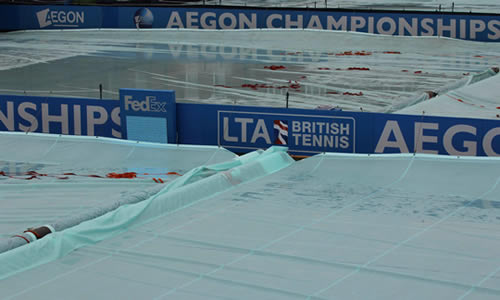 Wash out: The Queen’s Club courts made for a sorry sight as rain prevented play in west London on Monday

“What I like is that it’s just like my tennis club in France. It’s a nice small club, it’s on grass and it’s in London, which is great.”

Murray is joined in the Queen’s draw by no fewer than four British wild cards but the draw has been far from kind for any of them.

Two are in Murray’s quarter and drawn against seeds. Eighteen-year-old Liam Broady, who reached the finals of the Wimbledon junior singles last year, will play his first match at an ATP tour level against No14 seed, Gilles Muller. Before he can face Murray in the third round, he also has the prospect of the talented Grigor Dimitrov.

British No2 James Ward, who made a great run to the semis here last year, faces an even tougher test against No9 seed and world No34, Kevin Anderson, and is in the No17-ranked Feliciano Lopez’s eighth. The Spaniard is always strong on grass but lost to Murray—his potential quarter-final opponent here—at the quarters of Wimbledon last year.

At the other end of the draw, Scot Jamie Baker has to play London-based 18-year-old Oliver Golding in the first round. Golding hit British headlines last autumn by winning the US Open junior title and lost to the in-form Nicolas Mahut here last year. The reward for the winner of the all-Brit tie is Tsonga.

But when any of these men will begin their campaigns is in the lap of the gods. The four home wild cards were all scheduled to play on opening Monday but, with London awash with rain, they could be kicking their heels for some time yet.