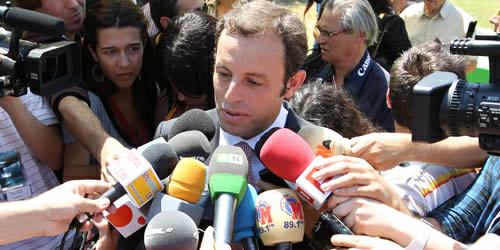 Barcelona president Sandro Rosell, who started his news conference with a tribute to Miki Roque followed by a minute’s silence, went on to thank Pep Guardiola for his work at Camp Nou.

“Thanks Pep, not for what we’ve won in four years but for how we’ve done it, for the values communicated.”

Rosell confessed that it would please him to see Guardiola come back to Barcelona one day as president because “it’d be a fitting end to his stage at the club”, and used the opportunity to announce that he will run for president in the next Barça elections.

He also spoke about Guardiola’s replacement, Tito Vilanova: “Tito is the new coach. We’re all really excited; all the players are really happy with the decision. We’ll stay with the model, clearly. Nothing’s going to change here; we’ll keep enjoying it and winning.”

Speaking about Jose Mourinho’s apparent clash with Vilanova following last summer’s Spanish Super Cup match, he said: “We don’t agree at all that the aggression shown to our coach should go unpunished. We’re not going to allow it. This is a club of actions rather than words, and we’ll continue to choose all the legal mechanisms to defend ourselves”, he added.

“Our coach was a victim, and it seems that this has been forgotten. We think it’s very bad that this should not be punished and that everyone is treated in the same way.”

Rosell announced a transfer budget of nearly €40m, although as he pointed out that “it’s not necessary to spend it all. We might spend a little more if the right opportunity is there. It’s an estimate.” He spoke about the figure that Barça would be willing to offer to sign Jordi Alba: “That’ll depend on the negotiation. I don’t think these deals should be public, but they are. The player will be worth what we’re willing to pay, which will dictate the agreement we make.”

On the possible interest in Didier Drogba, he said: “If Drogba is in Barcelona it’s because he’s on holiday, or for a personal matter. In whichever case, it’s something that’s up to the coaching staff.”

“They haven’t changed for some months now, not for good or bad. It’s neutral. My relationship with Florentino Perez is cordial, normal; institutional.” Rosell did criticize the attitude of the Real Madrid players in the final of the basketball league at the Palau venue. “In the final we expected them to collect the trophy, because it’s recognition of your opponents.”

He clarified his role as a defender of Barça: “When there’s something to respond to, on the pitch or in the dressing room, the answer comes from the pitch or the dressing room, which means, from players and coaches. If it’s a sporting director that makes an attack, the person who should respond is a sporting director. But in my life I’ve seen that a president responds to a player or a coach from another team. It’s absurd. Myself and the board will deal with the attacks against FC Barcelona at an institutional level.”

Quizzed on Spain, the Barcelona president said: “I hope they win the European championship, because I want teams with Barcelona players to win.”

Finally, Rosell also praised the maturity of the fans, above all for their reaction to the Champions League defeat against Chelsea. “That day we showed that we also know how to lose.”