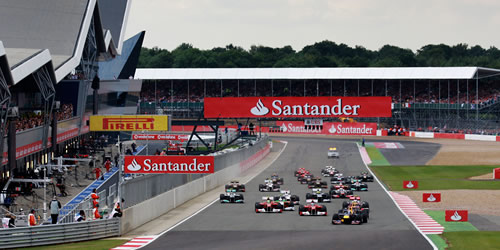 With the Formula 1 circus set to roll into Silverstone for the 2012 British Grand Prix next weekend, we bring you some facts and figures about the famous circuit.

• Silverstone invested more than £5m in the new circuit

• Away from the track, a number of improvements have been made to viewing areas. In addition to constructing elevated viewing banks, existing grandstands and fence lines have been re-aligned to improve site lines and to bring fans closer to the action

• Maggotts Corner is still the fastest turn on the Grand Prix Circuit at Silverstone, with F1 cars taking this bend at speeds of approximately 188mph, while being subjected to a lateral G-force of -4.5

Corners on the Silverstone Grand Prix circuit include:

• Abbey Corner: Now turn one an the circuit. The original Abbey was called Abbey Curve but the latest iteration is too acute to be called a curve and so it has been named ‘Abbey Corner’

• Farm Curve: This is the long left after Abbey Corner which passes close to the Farm and campsite

• Village Corner: Right hander after ‘Farm Curve’. This has been named ‘Village Corner’ after Silverstone Village

• The Loop: The long left hand corner referred to as ‘The Loop’

Ben Youngs is back to his best, says Leicester Tigers’ Tom Croft

England v Australia: Cook, Hussey and Bell will be the key batsmen