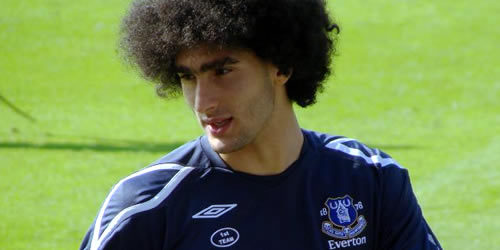 Marouane Fellaini admits he would listen to offers from “ambitious clubs” with Chelsea reportedly interested – but the Everton midfielder expects to be at Goodison Park next season.

The 24-year-old midfielder has scored 20 goals in 134 appearances for David Moyes’ side after joining the Toffees from Standard Liege in a £15m deal in 2009.

Chelsea have been linked with a move for Fellaini in recent weeks, and there is already a strong Belgian presence at Stamford Bridge, including their latest signing Eden Hazard.

And while Fellaini conceded he would have many friends at the Blues, the midfielder is not paying much attention to the speculation for now.

“If I have got to go, I will go, if not, I repeat, I am at Everton,” he told Belgian radio station RTBF.

“I am ambitious; I want to play in the Champions League or in the Europa League. Last season we finished seventh with Everton, and we were not able to qualify us for Europe, which was a shame.

“If an ambitious club comes in for me? Why not, just to gain experience but I’m on vacation right now, I do not give [speculation] too much attention.

“Every year they say I’ll be transferred to the left or right. But I’m still at Everton!

“If it comes, I take, if it does not come, I stay at Everton, where I am happy, and where I still have a four-year contract.

“Everything goes fast in football. You can be transferred tomorrow, as you can be in one or two years.

“For now, I’m on vacation, I try to arrive fresh at the start of next season. If there are any concrete offers yet? If this is the case, I am not aware.”

He added: “They talked about me in Chelsea? If I had to go there, I would have several friends – Hazard, Lukaku, De Bruyne, Courtois – there are many Belgians! It’s good for the national team.”

Arsenal defender Johan Djourou out of chances at The Emirates