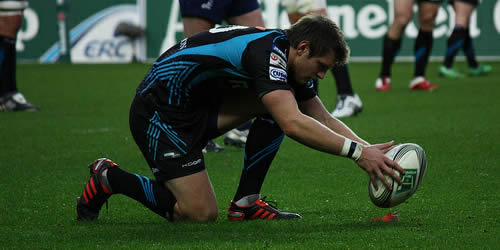 Dan Biggar in action for the Ospreys Photo: Sum_of_Marc, via flickr

Dan Biggar has laid down the gauntlet to Wales fly-half Rhys Priestland, warning the current first-choice that his place is under threat.

Priestland started all of Wales’ Six Nations matches, helping Warren Gatland’s side to a third Grand Slam in eight years, but some of his performances were called into question, most notably against England at Twickenham.

Biggar meanwhile, did not feature during the Six Nations but did end a year-long international exile against Australia last December, and will start against the Barbarians on Saturday.

Priestland is part of the 16-strong party heading to Australia early to prepare for Wales’ three-Test tour against the Wallabies, handing 22-year-old Biggar his chance at the Millennium Stadium – and he’s desperate to seize one of the remaining 18 touring places with both hands.

“He quite rightly deserves to be number one in the squad at the moment.

“There is no point me being happy to be on the bench, or having a holiday, because I want to be pushing all the way.

“I am just really glad to be back and really looking forward to Saturday and, hopefully, if I get on the tour, pushing for a place out there.

“We are aware that the first-choice team flies out [early] and it’s up to us, stepping up to the plate and showing we are competitive.

“There are a lot of guys pushing the starters all the way and a good game against the Barbarians will do our cause no harm.”