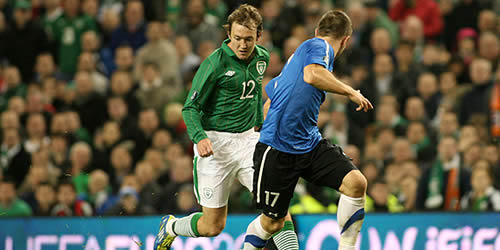 Aiden McGeady has criticised the Republic of Ireland’s “high intensity” training sessions after Giovanni Trapattoni’s side produced a lacklustre performance in their goalless draw against Hungary on Monday night.

Ireland’s final warm-up game was delayed due to bad weather and the visitors struggled to match Hungary in the first half in Budapest, before finally coming to life after the interval.

Spartak Moscow winger McGeady believes a heavy week of training in their pre-tournament camp in Tuscany took its toll on the Irish players – and he has urged his manager to tone down the workload ahead of Euro 2012.

“The training has been of such a high intensity, I think a lot of the players felt jaded [on Monday night],” McGeady told Sky Sports.

“A lot of players were saying at half-time, they felt pretty sluggish in their feet and I think that was an overwhelming factor in the first half.

“In the second half we picked up a bit. I think we need to take it easy on training a bit.”

Meanwhile, Robbie Keane was impressed by the impact of second-half substitutes Jonathan Walters and Simon Cox against Hungary.

And the 31-year-old Ireland captain believes it is crucial to have back-up options that can come off the bench and make an impact at Euro 2012.

“It’s important to have players who can come on and can change a game,” said the LA Galaxy striker.

“We certainly have players who can do that. It’s important to have that in a squad – that’s why it’s a squad – to help the team.”