Sharethematch.com looks at the influence of Andrea Pirlo on Italy's fortunes, and how England can stop the midfielder 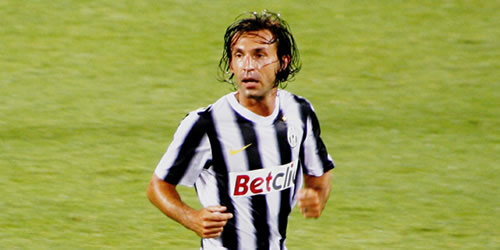 Despite many still criticising England for playing boring football throughout the group stage, they have done brilliantly to get to the quarter-finals.

No team has really lit up Euro 2012 with dazzling football as yet – even though it has been a great tournament so far – and Roy Hodgson’s disciplined approach has served the England team well.

With Italy up next, it is important that Hodgson holds firm the values that have got the team to this stage – he is working with what he has got at his disposal and the players are doing the job well.

There is a belief about this England squad that has not been present during previous tournaments, and this was confirmed by the surprising and battling comeback against Sweden.

England can definitely beat Italy, but to do so Scott Parker and Steven Gerrard must prevent Andrea Pirlo from dominating the game.

The 33-year-old has been magnificent for his national team so far, providing two assists and scoring against Croatia in three displays that have shown just how much Italy will miss him when he is gone.

If England can prevent Pirlo from pulling the strings, then they have a great chance of making it to their first major tournament semi-final since Euro 96.

Three quarter-finals and extra-time has not been needed so who is going to be the first to literally pay the penalty – England?

The first three last-eight fixtures have followed as you would expect with Portugal, Germany and now Spain progressing through to the semi-finals.

All were done in 90 minutes with relative ease as well, now Sunday night’s fixture is simply too hard to call and could well lead to the first shoot-out of the tournament.

It’s just written in the stars, isn’t it? No penalty shoot-outs needed and the first one involves England, it’s just set up for it.

Hodgson has maintained penalties have been practiced by England and if it does come to that it will be as intriguing as the match itself – Joe Hart is no mug in goal and neither is Gianluigi Buffon.

Maybe under Hogdson, Enlgand’s penalty curse will be no more but the supporters will not hope this theory will not be tested against Italy.