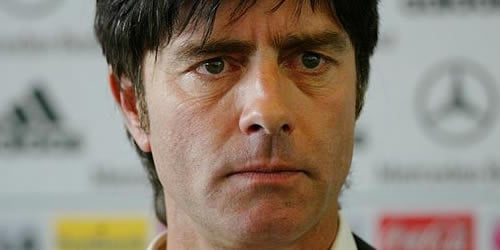 Joachim Löw claims England would provide his Germany side with a much sterner test at Euro 2012 than their last meeting at the World Cup two years ago.

Fabio Capello’s men were thoroughly beaten by Low’s side in Bloemfontein as Germany ran out 4-1 winners in the last 16 of the 2010 tournament in South Africa.

But Low, whose side will face either England or Italy for a place in the final, believes Roy Hodgson has made the Three Lions harder to beat since taking charge in May.

“England are much better under Roy Hodgson than in 2010,” said Low, whose side beat Greece 4-2 to book their spot in the last four. “They are much better organised, they counter-attack fast.

“Roy in a short time, and he is known for this, has really built a good, compact team and got them ready.

“They are not so open any more, they are not as divided as they were in 2010 and they really play well as a team. Roy has managed to organise this team very well and they are tactically better than in 2010.”

Lionel Messi: I still have so much to learn as a footballer