Euro 2012: We can go all the way, declares Wayne Rooney 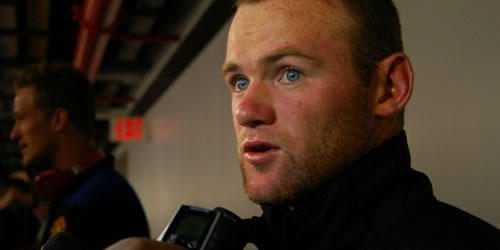 Wayne Rooney is set to start against Ukraine Photo: DailyHarrison.com, via Flickr

Wayne Rooney is convinced England can go all the way and lift their first major international trophy since 1966 at Euro 2012.

The Manchester United striker is set to return from his two-game suspension picked up as a result of his red card in the final game of qualifying in England’s final Group D game against co-hosts Ukraine on Tuesday.

England need only a draw to book their place in the quarter-finals, and Rooney is in confident mood ahead of the clash.

“If we keep working hard there is no reason why we can’t go really far in the tournament,” said Rooney. “I think we’re good enough.

“I know everyone doesn’t want us to build expectations up but I firmly believe we have got the players.

“Before the tournament started I said a country like ours needs to be in there with a shout of winning major tournaments.

“Obviously you need a bit of luck as well, but we’ve got a good opportunity. We’ve got the squad and are more organised than we have been as long as I’ve been in the squad.”

He added: “We are hard to beat now. If we keep doing that and keep working hard then there’s no reason we can’t go really far and be in with a shout of winning it.”

• England won the nations’ two friendly meetings, starting with a 2-0 Wembley success in May 2000. Robbie Fowler and Tony Adams scored the goals. Steven Gerrard made his debut and Andriy Shevchenko and Anatoliy Tymoshchuk featured for Ukraine.

• The teams will meet again in qualifying Group H for the 2014 World Cup, England hosting Ukraine on 11 September with the reverse fixture on 10 September 2013.

• Ukraine’s only previous final tournament appearance came at the 2006 World Cup when they overcame a 4-0 opening loss to Spain thanks to victories over Saudi Arabia and Tunisia. They then beat Switzerland on penalties, before defeat by Italy in the quarter-finals.

• Their defeat by France in Donetsk means Ukraine have now not won in the six games they have played in the city, registering two draws and four defeats. They scored in only two of those fixtures.

Croatia 0 Spain 1: Lessons as Del Bosque’s side edge into quarters

Brendan Rodgers: I will get Liverpool playing winning football