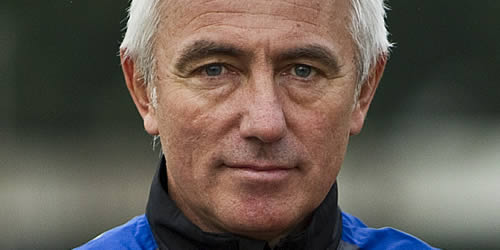 Bert van Marwijk admits his Netherlands squad have been feeling “tense” ahead of their Euro 2012 showdown with Germany on Wednesday.

Holland go into the Group B clash under pressure after suffering a shock 1-0 defeat by Denmark in their opening game at the weekend.

But although the Netherlands coach concedes his troops have been feeling “irritated” in the aftermath of Saturday’s game, he believes they can use their disappointment of the result as an extra source of motivation.

“Of course the atmosphere is tense,” said Van Marwijk ahead of Wednesday’s clash in Kharkiv. “For a big game like this – especially after you have just lost – of course it’s going to be tense, here and in the Netherlands.

“We’re preparing for one of the most important games for the past few years. How to beat them? I won’t tell you that because I’ll tell my own team that.

“The Germans are very strong but we can also beat them. How we do that and where we do that, I won’t tell you now.”

Greece 1 Czech Republic 2: Lessons from a Group A match-up