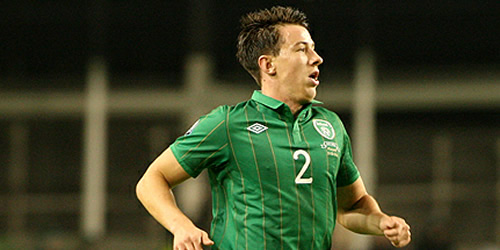 Sean St Ledger has described the Republic of Ireland as Italy’s “bogey side” ahead of their final Group C game at Euro 2012.

Ireland have made an early exit from their first major tournament since 2002 after successive defeats by Croatia and Spain ended their hopes of reaching the quarter-finals.

Giovanni Trapattoni’s side suffered a humiliating 4-0 defeat by world and European champions last Thursday, but St Ledger admits the Irish supporters rendition of “Fields of Athenry” in the closing minutes of the game had an effect on all the players.

And the Leicester City defender is optimistic Ireland can end their campaign on a positive note and give the travelling fans something to cheer by beating Italy – the Irish are unbeaten in three games against the Azzurri, with St Ledger scoring in a 2-2 draw at Croke Park in 2009.

“Those last ten minutes [against Spain] will live long in my memory,” said St Ledger. “It has never been the case where we have been losing 4-0 and been clapped off – it is usually the complete opposite.

“And when we arrived back at the team hotel, they were there again, clapping us again.

“We are deeply appreciative and that is why, against Italy, we want to give them a performance they deserve, to give them something back.

“They have pleasant memories for me, particularly the time I scored against them at Croke Park [in 2009].

“Every team has a bogey side. We seem to be Italy’s.”

• Italy have not beaten Ireland in their last three competitive meetings, and lost 2-0 in their most recent friendly encounter, in Liege on 7 June 2011.

• The nations first met on 21 March 1926, with Italy prevailing 3-0 (Baloncieri 13, Magnozzi 36, Bernardini 44) at the old Juventus stadium on the Corso Marsiglia in Turin.

• Irish fans, meanwhile, will remember that on 18 June 1994 – 18 years to the day before this encounter – Jack Charlton’s side broke a run of six straight defeats by Italy at the World Cup in the United States, with Ray Houghton’s goal securing a 1-0 win.