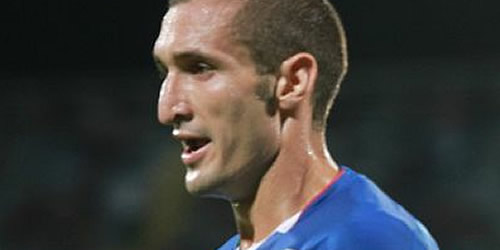 Giorgio Chiellini was forced off during Italy's win over Ireland Photo: R Vicario, via Wikimedia

Giorgio Chiellini has been ruled out of Italy’s quarter-final showdown with England due to a thigh injury.

The defender, who has started all three of the Azzurri’s group games in Poland and Ukraine, suffered a strain in his left thigh during the 2-0 victory over the Republic of Ireland on Monday.

“The scan he underwent confirmed it’s a strain,” said Italy doctor Enrico Castellacci. “He will certainly miss the game on Sunday.

“Obviously in a competition like this you have to try everything to have him back as quickly as possible but we will not take any unnecessary risks with his muscles.”

Chiellini, who was replaced by his Juventus team-mate Leonardo Bonucci against Ireland, had suffered a similar injury in the build-up to the European championship but Castellacci confirmed the two problems were unrelated.

“It’s nothing related to the injury he suffered just ahead of the finals,” Castellacci added. “It’s a pity because he had recovered so well from that one but he is very motivated and has already started rehab. Let’s see what happens.”