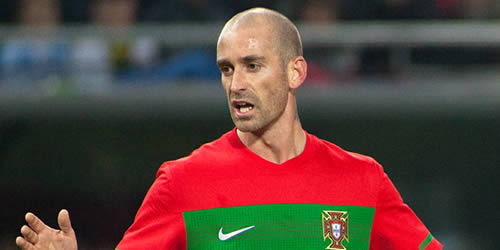 Raul Meireles has urged Portugal to embrace their underdogs tag and match Chelsea’s performances in the Champions League at Euro 2012.

The 29-year-old featured in each of Portugal’s group games as Paulo Bento’s side set up a quarter-final meeting with the Czech Republic on Thursday.

Meireles was a key part of Chelsea’s run to the Champions League final before picking up a suspension for the showpiece in Munich.

The Blues went on to beat Bayern Munich on penalties, capping a remarkable campaign which saw Roberto Di Matteo’s side reverse a 3-1 aggregate deficit against Napoli, ease past Benfica before beating defending champions Barcelona over two legs.

“Chelsea won the Champions League when nobody considered them as favourites,” he said. “When we began this tournament, nobody mentioned Portugal as one of the favourites.

“The best example for me is what I experienced with Chelsea this year in the Champions League. If we manage to do the same it will be the realisation of a dream.”

Meireles, who moved from Liverpool to Chelsea last summer, believes there are no standout contenders to win Euro 2012.

“There are no favourites really, because Germany and Holland were the favourites in our group and we qualified,” he added.

“We watched some of their games. They didn’t begin very well, like us [Portugal lost 1-0 to Germany], and they reacted brilliantly to it. We are expecting a very strong team, it will be a difficult match but we are going to do everything we can to neutralise their strong points on the pitch.”