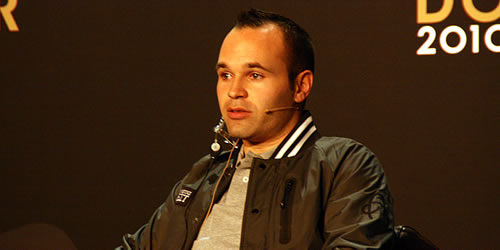 Andres Iniesta insists Spain will stick with their style of play Photo: The Sport Review

Andres Iniesta has brushed off claims Spain play boring football ahead of their Euro 2012 semi-final against Portugal.

Spain are unbeaten at the European championship, with their opening 1-1 draw with Italy followed by successive victories against the Republic of Ireland, Croatia and France.

However, Vicente Del Bosque’s side have been criticised for regularly omitting a recognised striker from their starting line-up, leading to claims the holders are being overly defensive.

“When a team always wants to attack against an opponent who shuts up shop, football is not as attractive as when the game is open,” said Iniesta.

“Our style of play has led us to success, to winning titles. Football’s so great because not everyone likes the same thing, we don’t have to all agree on everything.

“For us, the play that we have, the way we have of doing things, is what has led us to our success, to winning titles.

“We feel identified with our style of play, and a few years ago this style changed the history of Spain for good.”

• Gerard Pique, along with Xavi Hernández, Víctor Valdes, Andres Iniesta, Sergio Busquets and substitute Pedro Rodríguez, was part of the Barcelona team that overcame a Manchester United side including Cristiano Ronaldo and Nani 2-0 in the 2009 Champions League final in Rome.

• Ronaldo and Pepe were on the losing side in a Champions League semi-final with Real Madrid against Spain’s Barcelona contingent in 2010-11, although Ronaldo’s header did earn Madrid victory in that season’s Spanish Cup final between the teams.