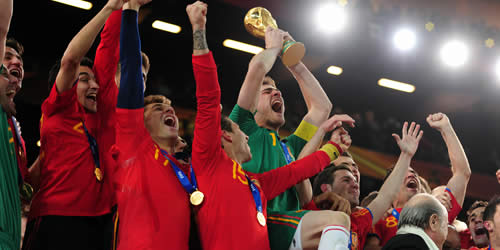 Former Spain manager Luis Aragones has taken the credit for his role in transforming the national sides’s “philosophy” ahead of their European championship title defence this June.

The 73-year-old former Atletico Madrid boss masterminded Spain’s Euro 2008 triumph to end their 44-year wait for a trophy after taking charge of the national side in 2004.

Aragones largely relied on the slighter but more technical members of his squad on the way to the final, when Fernando Torres scored the winner against Germany.

“It was me who had the idea to implement a new playing philosophy, to use all the small, talented guys and to play on the front foot,” Aragones told Marca.

“I remember that many people told me I was mad. The ultimate success wasn’t down to me, though, it was the players’ own triumph.

“However, we worked tirelessly on the idea that not only could we win but that we would win.

“There was a huge change in mentality – something we emphasised to every player individually and in group sessions. My ‘captains’, Iker Casillas, Carles Puyol and Xavi, were fundamental in that.”

Euro 2012: Carrick asked not to be considered for England – Hodgson