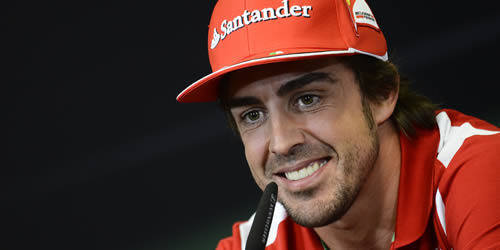 Fernando Alonso says he would welcome any team-mate in the future and revealed that he has discussed the issue with Ferrari president Luca di Montezemolo.

But the Spaniard reiterated that the Monza-based outfit is more than happy with the performance of current partner Felipe Massa.

Quizzed in Thursday’s official FIA news conference ahead of the European Grand Prix about rumours liking defending world champion Sebastian Vettel with Ferrari, Alonso said that the team was always the subject of speculation.

“Rumours with Ferrari are always the same,” he said. “When I won the 2005 championship with Renault, I was linked to Ferrari immediately – and I arrived in 2010. So, if Sebastian is linked now, maybe he’ll arrive in five year’s time.

“Every summer it is the same with Ferrari, as I said, but at the moment we repeat the same thing: extremely happy with Felipe,” he added. “Whatever team-mate comes in the future will be welcome, will be part of the team and part of Ferrari.

“As I said, when I joined this team the most important thing in Ferrari is to help each other to make one red car win. It’s something that President di Montezemolo is very clear on when you arrive on day one in Ferrari. So, whatever teammate is coming in the future, if it comes, will be no problem and we will try to work as we are doing now with Felipe.”

Alonso did, however, admit that the topic of future team-mates had cropped up in conversations with the Ferrari president and team principal Stefano Domenicali.

Regarding his own prospects in Valencia, Alonso pointed to consistency at the clutch of races coming before the break in the season in August as perhaps more important than victory this weekend.

“Getting some podiums now, in the next couple of races, especially in July when we have three races in four weeks – it will be important to have some consistency in this very important month,” he said.