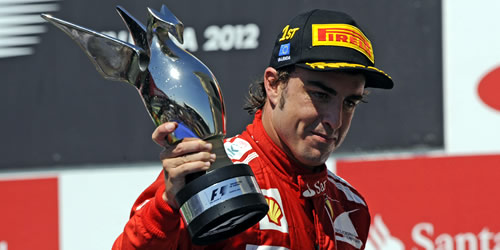 Fernando Alonso is the first driver to win two races this season Photo: Courtesy of Ferrari

Ferrari’s Fernando Alonso was lost for words after the Spaniard sealed victory on home soil at a thrilling European Grand Prix in Valencia.

Alonso, who becomes the first driver to win two races this season, started in 11th position on the grid but took full advantage of pole-sitter Sebastian Vettel’s retirement after the Red Bull’s engine failed.

Alonso powered through to clinch victory ahead of Lotus’s Kimi Raikkonen and Mercedes’ Michael Schumacher.

“It’s difficult to express in words what is the feeling now,” he told a news conference. “Winning a home grand prix is something unique – a very special feeling.

“I had the opportunity to do this in Barcelona in 2006 with Renault and I still remember that day perfectly. And now I did the same here in Valencia, with this special team, Ferrari, with the grandstands full of red colour and Spanish flags.

“Here now, with the Euro football championship also, there is a lot of Spanish atmosphere inside all of us.

“I’m feeling very proud to be a Spanish sportsman at the moment and winning in Spain is probably the best victory I ever felt in terms of emotions. Nothing compares to this one.”

Alonso’s triumph moves him to the top of the drivers’ standings on 111 points, 20 ahead of Red Bull’s Mark Webber.

The Ferrari driver admitted he was surprised by his win after such a poor qualifying on Saturday.

“After the qualifying, you never think that you can do a good result or that you can fight for the podium or something like that,” he added.

“When you find yourself third in the race after the safety car, I said: ‘hopefully there is the chequered flag now and I enjoy this podium celebration.’

“Two laps later I overtake [Romain] Grosjean on the restart and you think again ‘hopefully the race finishes now’. Then Vettel stopped and it was a very long race until the end and.

“I enjoyed so much this moment. But as I said, it’s difficult to put in words what I’m feeling.”