What lessons did we learn as Ferrari's Fernando Alonso won the European Grand Prix on the streets of Valencia? 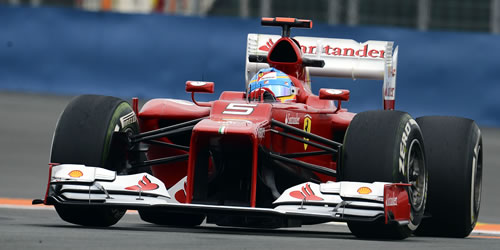 Fernando Alonso is the first driver to win two races this season Photo: Courtesy of Ferrari

Alonso is in the form of his life

Fernando Alonso’s superb victory in Valencia is confirmation that the Spaniard is driving near to his brilliant best. Despite the improvements made to the Ferrari since their much-publicised struggles at the beginning of the year, Alonso has been a threat at most races, over-performing in his car. Undoubtedly gaining from the demise of Sebastian Vettel on Sunday, he nonetheless made a crucial manoeuvre to pass the unfortunate Romain Grosjean after the restart following the safety car’s arrival mid-way through the race to be in prime position to benefit from Vettel’s retirement. Heading into the British Grand Prix in two weeks’ time at the summit of the drivers’ championship standings by 20 points from Mark Webber, this second victory of the season could prove the turning point of a season in which Alonso mounts a real challenge to become world champion for the third time. If he does, it would arguably be his greatest achievement, given the poor competitiveness of the Ferrari in earlier rounds.

The much-derided Valencia Street Circuit will no longer be a yearly fixture on the calendar, with a slot-sharing arrangement with Barcelona starting in 2013. It is a great shame that it took until this year for it to produce an enthralling race. It is hard to overtake in Valencia, but as drivers up and down the field proved, not impossible. Yes, a lot of them were down to mistakes and tyre degradation, but does it really matter? This year’s race had it all – overtaking, accidents, controversy, the safety car – and all without rain being thrown into the mix. The tight circuit proved crucial on at least one occasion – on other tracks with more run off, Lewis Hamilton would have been able to continue after being shunted by Pastor Maldonado. Not so on a street circuit however, and the only place the McLaren driver was heading was into the wall.

Red Bull are not perfect

After the invincible form shown in the last two seasons, this weekend’s race provided the best evidence yet that Red Bull are no longer in a field of one at the front. Mark Webber’s disastrous qualifying session, which saw him exit in the first session to start 19th, was the result of a fault the team could not recognise – never a great position to be in. Webber did very well to put a recovery drive together to finish fourth. Team-mate Sebastian Vettel was cruising to his third straight victory at this circuit before pulling off and retiring – reliability has been one of the cornerstones of the team’s success. There is no crisis at Red Bull – they still lead the constructors’ standings by 39 points – but this is the first time we have seen them under sustained pressure from their rivals since Vettel won the first of his two world titles. It will be intriguing to see how they bounce back from this missed opportunity.

Kobayashi got away lightly with a five-place grid drop

In a season where we have seen Hamilton demoted to the back of the grid for fuelling irregularities, Kobayashi should be grateful he has only been given a five-place grid demotion for Silverstone. The Japanese driver was involved in incidents that compromised both Bruno Senna and Felipe Massa’s races, only one of which he was punished for, and indeed, Senna was inexplicably handed the drive through following their clash. Kobayashi is unarguably skilled – he has bundles of raw pace and his attacking overtaking style have gained him many fans around the world, if not out on the track. However, this is not the first time he has been involved in tangles and, unless ironed out, this clumsiness could be the biggest stumbling block in him becoming a race winner rather than the nearly man.

Caterham are the closest to midfield they’ve ever been

Heikki Kovalainen’s 16th in qualifying was no fluke. Neither was the impressive 13th and 14th he and team-mate Vitaly Petrov earned in the race. Caterham have been equal or better than Toro Rosso for the majority of the weekend, with Kovalainen out-qualifying both Daniel Ricciardo and Jean-Eric Vergne on merit. Widely expected to take 17th and conserve tyres for the race, Kovalainen went out in Q2 to prove a point, and duly out-qualified Ricciardo. Vergne, who is struggling in both qualifying and race trim at the moment, found himself unable to clear the Caterhams in the race, and whilst attacking the Finn, took himself out of the race. With more improvements due for Silverstone, who would bet against Kovalainen and Petrov upstaging their more established rivals once again?