Red Bull's Sebastian Vettel will be desperate to make it a hat-trick of wins in Valenica this weekend, writes Steven Oldham 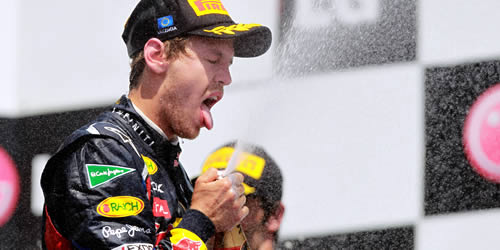 Red Bull’s Sebastian Vettel will be looking to make it a hat-trick of wins around the streets of Valencia at this weekend’s European Grand Prix.

Vettel heads into the race in third place in the drivers’ standings on 85 points, three points behind Canadian Grand Prix winner Lewis Hamilton and one behind Fernando Alonso.

The British driver became the seventh winner in as many races in Montreal, a feat never achieved before the 2012 season.

Hamilton and Alonso are reaping the rewards of consistent points finishes – the leading pair are the only two drivers to have scored points in all seven races.

The McLaren driver, who shared an unfamiliar looking top three with Lotus’ Romain Grosjean and Sauber’s Sergio Perez last time out, is enjoying a stellar season, in complete contrast to his team-mate Jenson Button.

Hamilton has almost double the amount of points that Button has scored so far, and the 32-year-old is sitting in a lowly eighth place after finishing second last season.

Since his victory in the season-opener in Australia, Button has picked up points in only two races.

Last year in Valencia, Vettel took the chequered flag from Alonso and team-mate Mark Webber was third. There were no retirements in the race, setting a new record for the highest number of finishers in F1 history as all 24 drivers completing the 57 laps.

This year, Hamilton could be the man to beat, but Vettel and Ferrari’s Felipe Massa are the only drivers on the grid this year to have won around this circuit.

It is also the last time F1 will visit Valencia on a yearly basis – from next year, the track will alternate hosting the Spanish Grand Prix with Barcelona

Both Kimi Raikonnen and Michael Schumacher have shown race-winning pace this year, and Sergio Perez will take confidence from his second podium finish two weeks ago. So, the unprecedented number of race winners may just continue this weekend.