Fernando Alonso: Ferrari still have plenty of work to do this season

Fernando Alonso insists there is plenty of room for improvement at Ferrari this season, despite his European Grand Prix victory 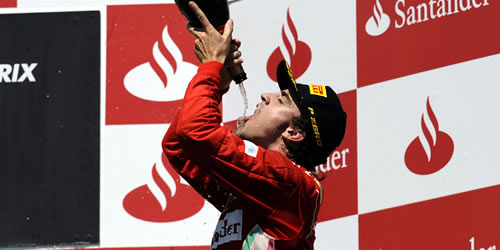 Fernando Alonso admits that Ferrari still have work to do in order to maintain a title challenge this season, despite his triumph at the European Grand Prix on Sunday.

The Ferrari driver, who had started 11th on the grid, clinched victory at the Valencia Street Circuit after capitalising on Sebastian Vettel’s retirement to become the first driver to win two races this season.

But the Spaniard, who now leads the drivers’ standings by 20 points, concedes that Ferrari are still “not in the position” they want to be and says there is plenty of room for improvement.

“Any championship in which we participate, the championship should be the target, regarding the history and the level of the team, but yesterday we were P11 and P13 so we need to work.

“It’s true that we believe and we will never give up, we will have confidence in ourselves and we will arrive with optimism at every grand prix we go to, but at the same time, apart from winning today or finishing sixth today, we know that we are not in the position that we want to be and there are a few cars quicker than us and we cannot be blind to that. We need to work.”