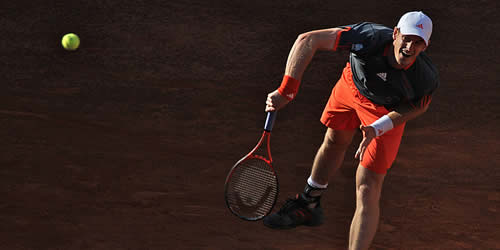 Andy Murray will play David Ferrer for a place in the semi-finals Photo: Marianne Bevis

Andy Murray said he used the intimidating atmosphere on Court Phillipe Chatrier to “get him going” and fight back to beat Richard Gasquet as he booked his place in the French Open quarter-finals with a four-set victory.

The British No1 dropped his serve in the first game of the match and struggled to recover in the first set, losing it 6-1 in just 29 minutes before masterminding a dramatic turnaround to set up a meeting with sixth seed David Ferrer.

Murray, showing little signs of the back injury that looked set to threaten his progress in Paris, was able to wrap up a 1-6 6-4 6-1 6-2 victory in two-and-a-half hours after Gasquet fell apart late in the second set.

The 25-year-old Scot admitted he was riled by the partisan home crowd and said he used it as a source of motivation to turn the match in his favour.

“You always have a chance to get back into it,” said Murray, who hit 59 winners on his way to victory. “You can start slow sometimes. I struggled with the conditions early on.

“It was very different and very slow compared with the last round and he was going for big shots. I needed to be patient, and did that at the end of the second set and was able to dictate the match from then on.

The fourth seeded added: “Matches can change all the time. After the first set and a few games of the second I’m sure not many people would have expected it to turn that quickly, so you need to stay focused all the time.

“I was dictating the points and I needed to keep doing that. I just managed to up my game enough to win.”

World No4 Murray admitted the blustery, cold conditions in the French capital made it difficult for him to adjust his game.

“It was very damp and wet on the court. I was hitting the ball very short at the start and he was dictating all of the points,” Murray told ITV. “I needed to change it up a little bit and played very well at the end.”

Murray will take on Ferrer on Wednesday for a place in the last four at Roland Garros and the Scot is expecting a difficult test against the Spaniard.

World No6 Ferrer, who disposed of Marcel Granollers in straight sets to reach the quarters on Monday, has won all three of the pair’s previous meetings on clay.

“It will be a tough match for me,” said Murray. “I’ve always struggled against him in practice. We practice a lot together.

“He’s a great clay-court player and I practised with him just before the tournament started. He’s always been a tough match for me on the clay so I’m going to have to play very well like I did in the last few sets today.”