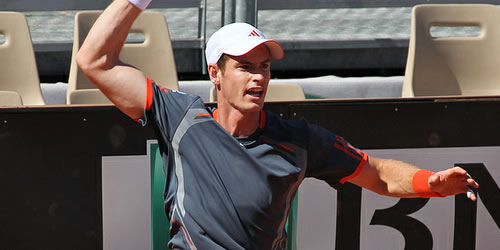 Andy Murray showed no signs of the back injury that had threatened his French Open progress as he eased into the fourth round with a straightforward 6-3 6-4 6-4 victory over Colombia’s Santiago Giraldo.

The British No1, whose troublesome lower back problem almost forced him to retire early on in his second-round win over Jarkko Nieminen, produced a dominant display to dispose of world No50 in just over two hours.

Fourth seed Murray will now face either Richard Gasquet or Tommy Haas for a place in the quarter-finals in Paris.

“I’m very happy. I was just trying to make sure I got myself in the best shape possible for the match,” Murray told BBC Sport.

“I was really surprised with the way I served because that was one of the things that was giving me trouble the other day and I hardly hit any in practice yesterday.

“He [physio Andy Ireland] has helped a lot. We’ve done two or three treatments each day to try and make sure I get better, seen the doctor, taken all the right medication, anti-inflammatories. Those guys have made a huge, huge difference.”

Murray seized the initiative mid-way through the first set when he sealed the first break to take a 4-2 lead before cementing his advantage with a hold to love. The 25-year-old Scot then confidently held his serve to love to take the first set 6-3 in just 28 minutes.

The second set followed much the same pattern as Murray looked untroubled by the injury that had hampered him on Thursday to dominate proceedings on Court One in Paris.

Murray secured a break in the fourth game and saved a break point at 5-4 to serve out the second set in 44 minutes, hitting 11 winners on his way to a 2-0 lead.

The first six games of the third went with serve but the world No4 eventually sealed the advantage at the seventh time of asking, breaking his Colombian opponent for the third time in the match to take a 4-3 lead.

Murray, who notched up 31 winners to Giraldo’s 28, then served out the match to secure his place in round four with a crosscourt backhand winner on his second match point.