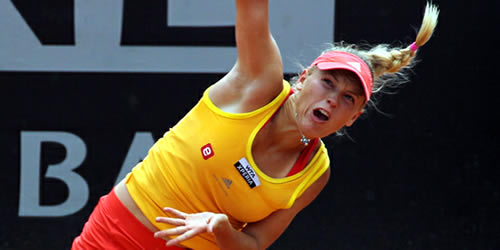 Caroline Wozniacki hit out at the French Open officials after the former world No1 suffered a shock 6-1 6-7 (3-7) 6-3 defeat by Kaia Kanepi in the third round on Sunday.

The 21-year-old was left furious when her Estonian opponent saved a break point at 1-1 in the second set after the ninth seed was convinced Kanepi’s shot had landed past the baseline.

The 2009 US Open finalist asked the chair umpire for a closer inspection after the line judge called the shot in – but the decision was upheld much to Wozniacki’s dismay.

She still managed to win a second set tie-break but Kanepi, the 23rd seed in Paris, clung on to beat Wozniacki, who fell in the third round for the second successive year.

“It’s a disgrace mistakes like this are made – it was clearly out,” said Wozniacki. “If they cannot see, they should have other umpires on the lines or invent Hawk-Eye on these courts.

“When a ball travels five miles an hour in the third set at 1-1, I think either the linesman or the main umpire should be able to see the ball.”

Kanepi’s three-set victory sets up a fourth-round match-up against Arantxa Rus, who completed a dramatic win in the final set against German 25th seed Julia Goerges on Saturday night.