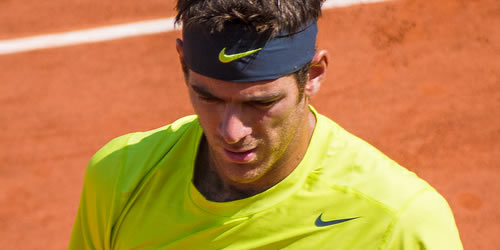 Juan Martin Del Potro won the US Open in 2009 Photo: y.caradec, via Flickr

Juan Martin Del Potro admitted a drop in intensity cost him a place in the French Open semi-finals after the Argentine was beaten 3-6 6-7 (7-4) 6-2 6-0 6-3 by Roger Federer on Tuesday.

The ninth seed produced a swashbuckling performance in the opening two sets which mirrored his US Open final triumph over the 16-time Grand Slam champion in 2009.

But Federer finally gained a foothold in the match as Del Potro’s serve, which had been so impressive in the initial 80 minutes of play, crumbled and the world No3 levelled the last-eight encounter at one set all.

Del Potro was hampered by a heavily strapped left knee as Federer fought back set up a semi-final clash with top seed Novak Djokovic as he looks to win the French Open for the second time.

“I think I played a great match, even the third and fourth set,” said Del Potro.

“He started to play much better than in the beginning of the match and I feel his ball more in the baseline. He put me to run a lot in the third and fourth set.

“He played better than me after the second set. I didn’t have any chance to win [a game] until the first game in the fifth set when I had break point. He took the opportunity in the fifth set and he won.

“I didn’t serve well, and this is why I lost intensity in my game. Let me say that again: Federer played much better.

“I had to make efforts to serve better, and he did everything so that my serve was not as good as I wanted it to be and I couldn’t take my chances.