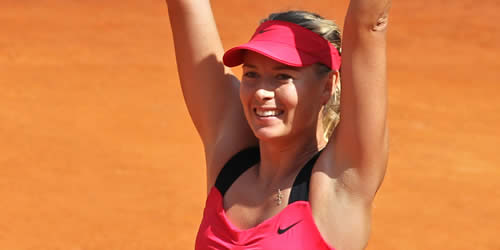 Maria Sharapova is only the 10th woman to have won all four Grand Slams Photo: Marianne Bevis

On one side of the sun-drenched Philippe Chatrier court stood a three-time Grand Slam champion, a former and future No1, 6ft 2ins of picture-perfect elegance in both physique and dress, and the hot favourite to win perhaps the most significant title of her career: Maria Sharapova.

On the other side stood a diminutive woman of under 5ft 5in, playing the first Grand Slam final of her career, a bustling, intense package in vibrant cerise clasping a special racket, discovered by chance, that had brought her more success in 2012 than ever before: Sara Errani.

Both women were about to play their first French Open final.

They were born just 10 days apart, in April 1987, and though they had trained in Florida together as juniors, they had never played one another on the tour.

Their routes and achievements to this first intriguing encounter were also filled with similarities and contrasts. Sharapova had already secured her rise back to the No1 ranking she last held exactly four years ago. Since then, a shoulder injury had kept her out of action for nine months and she subsequently dropped to 126. Her return, with both improved fitness and movement, had shown great application and determination — but then so had the progress of her opponent.

Errani, with a new training regime and that newly-discovered racket, was also ready to break fresh ground in the rankings: her first time in the top 10 and as the highest-ranking Italian. On her way to the Paris final, she also became the first woman in a decade to reach both the singles and doubles finals — and she bagged the latter title yesterday. And if all that was not enough to impress her impressive foe, Errani had taken out two former champions — Ana Ivanovic and Svetlana Kuznetsova — plus two top-10 seeds — Angelique Kerber and Sam Stosur — to reach her first Major final.

Errani would not, in short, be overawed by the venue, the opponent or the occasion, nor by the ranks of Grand Slam champions looking on: Martina Navratilova, Monica Seles, Amelie Mauresmo, Lindsay Davenport, Arantxa Sanchez Vicario. But the scale of the Italian’s task was laid bare in the opening minutes of the match.

Sharapova opened at full tilt, in both volume and ball-striking, to pound winner after winner past her opponent: Her down-the-line backhand was particularly venomous. She broke twice to take a 4-0 lead before Errani managed to disrupt the Sharapova rhythm, and some acute angles and deep forehands broke to 15. The Italian was on the scoreboard.

Apparently buoyed up by the break, Errani chased into the net on her own serve for a volley winner, sliced a backhand away for another and defended like a terrier to force errors from the Sharapova forehand. She pulled back the deficit to 2-4, despite more ferocious hitting from the Russian.

But so great was the pace, depth and accuracy of the Sharapova backhand in the seventh game that Errani could not get near a point, and came under more pressure, 15-40, 2-5 down. She held on by her fingernails and withstood the barrage to reach 30-30 as Sharapova served for the set but, in the end, the determined Russian simply stepped in with her killer backhand to close out the set as she had started it, 6-3.

One set down, and Sharapova was dominating with the kind of power that few women in the modern game can wield. Despite just four errors from the Errani racket, Sharapova had, in only 35 minutes, struck 19 winners to Errani’s four. She had also fired 70 per cent of her first serves into play, dropping points on just three of them. With fist clenched and head bent with icy focus, she embarked on the second set with similar intent.

Errani served with variety and accuracy but still found herself 0-40 down courtesy of three straight backhand winners from Sharapova. A fourth cannonball down the line finished the job and Errani suffered an immediate break.

Her problem was simple: She was not allowed to play her all-court, doubles-influenced, clay-suited game. Rarely did Errani have the time or space to come to the net — though when she did, she was invariably rewarded with a point. She managed it twice in Sharapova’s first service game, and reached deuce with a short, sliced forehand, but the Russian resisted to hold the 2-0 lead.

Errani, to her great credit, made Sharapova work hard every step of the way, and the demands of the Russian’s powerful shot-making forced her to slow the tempo between points to gather her breath. For while her first-strike tennis won most of the short rallies, Errani often prevailed in the long exchanges. Indeed, the Italian’s hustling defence-turned-attack tennis won exuberant cheers as she threw up winning lobs and picked off high smashes to hold her own serve.

Sharapova’s error count crept up to 20 as she faced a break point in the fourth game but, holding off the challenge, she promptly stepped in to assault Errani’s serve. With a relatively slow delivery, it was proving harder by the game for the Italian to fend off the super-charged Sharapova retorts: She was broken and 1-4 down.

Despite a flurry of winners that earned Errani a break back, Sharapova’s revenge was again swift, with another break and a 5-2 lead.

In the end, the result was entirely predictable though, much to the pleasure of the chanting French crowd, Errani went out in a blaze of glory, pulling off two glorious drop-shot winners to bring up two break point chances. The power and determination of Sharapova—along with perhaps a little destiny — quickly doused the flames and she sank to her knees for the first time on Paris’s red clay. The elusive French title was hers at last, and in truly impressive style.

This title completes Sharapova’s set of Grand Slams: She is only the sixth woman in the Open Era to manage it. And she looks ready for much more.

Still only 25, Sharapova is moving more freely and quickly than ever and is hitting with greater power, accuracy and consistency, it seems, with every passing tournament.

French Open 2012: Nadal and Djokovic destiny in the balance