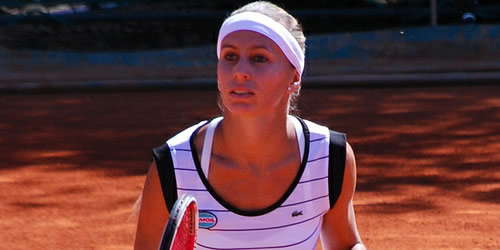 Sam Stosur is expecting a “tough” French Open semi-final against 21st seed Sara Errani after the Australian secured a 6-4 6-1 victory over Dominika Cibulková.

The US Open champion was in impressive form against Cibulková, who beat world No1 Victoria Azarenka on her way to the quarters, with the fifth seed hitting 30 winners in contrast to her opponent’s 28 unforced errors.

Stosur wrapped up the win in just 85 minutes to set up last-four meeting with Italian Errani, who beat former champions Ana Ivanovic and Svetlana Kuznetsova before her victory over Angelique Kerber on Tuesday, for a place in the final at Roland Garros.

“It’s never easy to come out here when it’s a bit windy and your opponent is going for her shots. I’m really pleased to play the way I did and get through,” said Stosur.

“She runs very fast, has quick legs and it aggressive. She really hits her forehand and you have to be aware of what you’re doing, do the right things at the right time.

“The last few years have been very good to me here in Paris. I love playing on this court, it doesn’t get much better than this.

“Sure [I’ll be the favourite in my next match], but it doesn’t mean too much in the Roland Garros semi-finals. I played Angelique [Kerber] in the US Open semis and it could be as repeat. If not, Sara is very tough as well.”