Maria Sharapova will face Italy's Sara Errani in the French Open final, where the Russian is looking to complete a career Slam 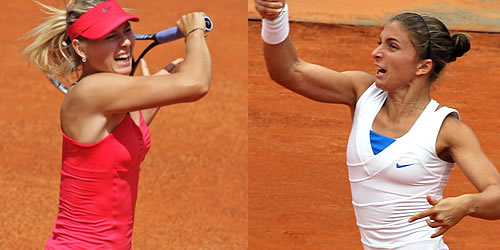 Perhaps only the most prescient of tennis experts would have predicted the last four women standing in 2012’s French Open, but two of them in particular had special incentives to drive them towards the last match.

For Maria Sharapova, a final finish would reclaim the No1 ranking for the first time since June 2008 and a chance, should she go on to win the title, for the career Grand Slam.

For Sara Errani, a win would see her break the top 10 for the first time in her career and see her overtake the Italian woman who reached the last two finals in Paris, Francesca Schiavone, and become the top player in her country.

So for the petite, charismatic Errani, perhaps more than for the other three contestants, this was the biggest match of her career: She had never before played a Grand Slam semi-final. Indeed not until this year’s Australian Open had she gone beyond the third round of any of the 18 Grand Slam singles draws she had played.

But in Melbourne, with a new, untried, unsponsored racket in her hand, she reached her first quarter-final, and thereafter had not looked back. Starting the year at No45, she rose through 2012 to 24, but even that did not do justice to her performance since the discovery of her tennis-transforming racket. In the race, she was already ranked No9 with three singles titles—and for good measure five doubles titles—to her name.

All her singles success had come on clay—Acapulco, Barcelona and Budapest—but she had not beaten a top-10 player in any of them. Come Paris, though, she beat No10 Angelique Kerber in the quarters and, just as impressive, beat two former French champions on the way: Ana Ivanovic and Svetlana Kuznetsova.

Now she confronted an even higher seed. Sam Stosur had not just beaten her in the second round of Rome this year but in all four previous meetings too.

The contrasts were many and compelling. Where Errani trod new ground, Stosur was both a reigning Grand Slam champion—at the US Open—and also a finalist at Roland Garros in 2010.

Where Errani was a bustling, bouncing bundle of muscle as adept at the net as the baseline, Stosur was the elegant powerhouse with a serene demeanour, able to unleash one of the most powerful forehands and formidable kicking serves in the women’s game.

Where the petite, barely 5ft 5in, Errani voiced her effort with every strike—a deep-throated grunt not unlike her Fed Cup associate Schiavone—the taller Stosur was a silent assassin, making little more than a sigh at each serve.

In rankings, too, they were as a mirror: Errani at No8 in doubles but just 24 in singles, while Stosur stood at No6 in singles and only 40 in doubles.

Even in dress they opposed: Errani in cerise from head to toe, Stosur in black with just a trimming of hot pink.

Despite the heavy conditions created by an afternoon rainstorm, Stosur asserted her power by breaking in the opening game, but Errani quickly broke back, and they stayed on level terms with both women firing big, kicking serves and finding deep baseline corners.

Not until 5-5 did either woman gain another break point, and then there were three of them—all Errani’s. The Italian changed things up with a couple of drop shots and ballooning topspin forehands, and forced an error from Stosur on the third. Against the odds, Errani took the lead and served out the set with no sign of nerves, 7-5.

Things looked even more worrying for Stosur at the start of the second set, with huge hitting from Errani earning her a break point in the first game. The Australian, though, stepped inside the baseline and let her forehand do the talking. She ran down a couple of drop shots with impressive speed and held.

It was a strategy that saw the Australian’s a growing tally of winners eventually begin to outweigh her errors. Having taken 10 minutes to hold her opening serve, she began to rush the net as often as her opponent and was rewarded with a quick break of the Errani serve. But unlike the first set, Stosur kept her foot down and she broke again with a cross-court forehand winner reminiscent of Novak Djokovic, and ran through the set for the loss of just one game, 6-1.

The third set saw both women trying to claim the upper hand from inside the baseline. It was feisty, big-hitting stuff, both going for the lines, both willing to attack the net. In the first game, the nerves that have so often plagued Stosur’s game seemed initially to haunt her. She went 0-40 down and was broken as she sprayed errors around Philippe Chatrier. In what seemed like moments, she was 3-0 down. She came back at the Italian in fine style, though, to break Errani with a backhand down-the-line winner.

Errani, in turn, found some courageous shot making, including a forehand drop shot to earn another break point in the sixth game. Stosur remained aggressive to hold, but in the eighth, it was a different story. Now pummelling deep to the Stosur backhand, Errani drew growing numbers of errors—21 for the final set alone—while she herself defended superbly to make a decisive break through.

Now with a 5-3 advantage, the Italian threw herself headlong at her first Grand Slam final and her first top-10 ranking: She hammered a winning forehand winner to take set and match, 6-3.

It was a weeping, disbelieving Errani who gazed at her cheering box after a performance—and a tournament—that was as inspiring as it was unexpected.

Less unexpected, though just as inspiring, was that Errani has to return to court to play the doubles final in Paris, as well, but surely her heart will be fixed on the solitary title that her countrywoman won in 2010.

But if Errani’s challenge was great against Stosur, it was about to become greater still. She will face the woman aiming to write her own history and already guaranteed to be next week’s No1.

Sharapova had sailed in untroubled fashion to her semi-final against Wimbledon champion Petra Kvitova. Not only had she seen her biggest rivals, Serena Williams and Caroline Wozniacki, fall ahead of her meetings with them, she had dropped fewer than five games in all but one match. But regardless of her 16-1 clay record during 2012, it was to Kvitova that Sharapova lost in last year’s Wimbledon final, and both victories over the Czech this year had been very hard earned. So most expected that this match, too, would be close.

And Kvitova came out strongly, despite strong blustery conditions, to hold serve. In the difficult conditions, Sharapova faced a break point in her opening game, but she resisted and swiftly applied pressure to Kvitova in what was already a slugfest from the baseline.

Again, Kvitova earned a break point, but Sharapova held and began to find her range and some fearsome focus. Her powerful returns of serve brought up three more break points, and Kvitova conceded the first. Making just five winners to Sharapova’s 12, the Czech was broken again to love and the Russian took the opener, 6-3.

The most impressive improvement in the Sharapova game has been her movement around the court: That was very clear in the defence of her Rome title. She defended strongly and picked up the wind-affected balls far better than her opponent, and when she broke in the third game, it looked all over.

Whether it was down to the conditions is hard to say but Kvitova, despite her proven net skills, resisted attacking the front of the court, apparently in thrall to the baseline power and rhythm of her opponent. She did manage to break back to level at 3-3 but, in a flurry of errors, she was broken again and Sharapova advanced with surprising ease to her first French Open final in her third semi-final appearance.

It was not pretty stuff and failed to engage the Paris crowd as much as the star appeal of Sharapova might have expected. But if Errani, fleet of foot but giving away 9ins to the willowy Sharapova, can replicate the all-court skills, top-spin power and talent for retrieval that has got her this far, the final should be enthralling indeed—particularly with such special incentives on the line.