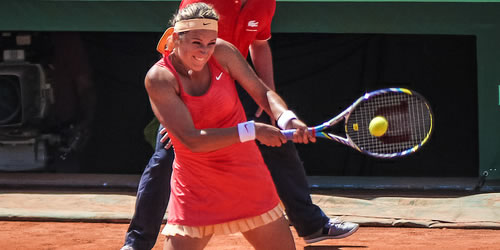 Victoria Azarenka plans to take a break ahead of Wimbledon after she was dumped out of the French Open by 15th seed Dominika Cibulkova in the fourth round.

The world No1, who lost 6-2 7-6 (7-4) to her Slovakian opponent on Sunday, admitted she has been struggling with mental and physical fatigue in the wake of her maiden Grand Slam triumph in Melbourne back in January.

The 22-year-old Belarusian lost in the finals of both Stuttgart and Madrid before pulling out after the first round in Rome last month and said she does not plan to play any tournaments ahead of Wimbledon later this month.

“There has been a lot of tennis for me in the last five months,” said Azarenka after her defeat on Sunday. “I haven’t been home in a while, and it’s something that I need just to get rested mentally, definitely, and just to get out of the tennis field a little bit.

“And once I have my passion and desire back on the court, I’ll be on the grass.

“Today I couldn’t do it. It was just not going for me. I tried everything. All I could hope for was her mistakes.”

“I think she plays much better against the top players than maybe a little bit lower-ranked players. She really has that desire. I don’t know what motivates her to play that way.”

Cibulkova had beaten Azarenka just once in eight meetings before Sunday’s fourth-round match and the Slovakian, who will face either Sam Stosur or Sloane Stephens for a place in the semi-finals, admitted she was worried she might blow her chance of beating the world No1.

“You can’t be human if you weren’t thinking about that,” said Cibulkova. “This year in Miami I was 6-1 5-2 up against her. And last year in Miami it was the same.

“Today it happened the same when I was 4-2 up. And that’s why I got a little bit…not nervous, but not going for my shots any more.

“But today it was a great thing that I managed to go through these emotions. She was 6-5 up, and I said, ‘Hey, come on, you have to play your game again and just make it.'”