French Open 2012: Nadal and Djokovic destiny in the balance

The French Open final is postponed until Monday due to rain, with Rafael Nadal leading Novak Djokovic 6-4 6-3 2-6 1-2 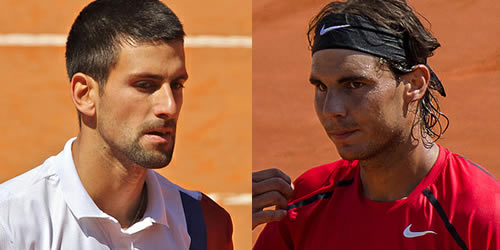 And so the rivalry of the decade headed towards perhaps its most telling confrontation.

It was here, in 2010, on France’s famous terracotta, that the dominance of Rafael Nadal and Novak Djokovic began its run.

It was here, twenty-four months and eight Grand Slams ago, that Nadal both reasserted his claim over the Parisian clay—he lost for the one and only time at Roland Garros in 2009—and went on to win Wimbledon and the US Open. He had a career Slam at last and had only to win in Melbourne in the New Year to achieve that most rare of accolades, a complete set of Majors at one time.

But injury intervened as the winning post beckoned and he fell in the quarter-finals.

In his place came the outstanding campaign of the year as Djokovic stormed to his first Major title since winning the same trophy in 2008. He would go on to take Wimbledon and the US Open, too, but Roger Federer intervened in Paris where Nadal took a sixth French Open title.

The pendulum was firmly on the Serb’s side at the start of 2012, but the time was ripe to start its swing back to the Spaniard, as their near-six-hour battle in Australia showed. Djokovic won, just, and found himself where Federer and Nadal had already been: holding three of the four big trophies.

Now, with either the Spaniard or the Serb certain to take Grand Slam honours for the ninth consecutive time, they played one another in a fourth straight Major. And this time one or other could claim a bigger prize than any man before.

Mere mortals may have frozen in the face of such challenges: Djokovic aiming to match an achievement last set more than 40 years ago and held by one of the few in tennis history, Rod Laver, of greater standing than either man; Nadal aiming to take from the iconic Bjorn Borg the title of “greatest ever” clay player with a seventh French trophy.

Only one could succeed.

Their personal rivalry had, in itself, become hugely significant. They would face each other for the 33rd time in their 15th final. Nadal led by 18 to 14, though the tally in finals was a perfectly balanced 7-7. But the key component that disturbed their symmetry was the clay: Nadal had won 11 of their 13 meetings on the surface that fitted him like a glove. And this year, he stemmed the tide of seven losses in finals to Djokovic by beating the Serb in Monte Carlo and Rome.

Flooded with confidence, the Spaniard went on to suffer only one break of serve in Paris and lost only 35 games—the lowest number for anyone reaching a Major final since Borg won the 1980 French title.

But could Djokovic’s statistics trump him? The Serb was undefeated in 27 Grand Slam matches—including victories over Nadal in all three previous Majors.

So the pendulum was poised—and for several long minutes before play even began. Neither man wanted to wait for the other at the coin toss. Neither wanted to wait at their baseline when the umpire said “play”. Both took a few extra moments on their seats, but both times, Djokovic gave in first.

In the mind game at least, Nadal seemed the winner, and he translated that into the opening three points—big forehand winners all. An enormous cross-court strike from the Nadal backhand opened another break chance and this time he drew the error and the break.

Nadal carried the same energy into his own serve. Perhaps it was the vivid pink torso against its soft orange backdrop, but the Spaniard appeared to bristle. His tics were completed with unusual urgency in between firing a first ace and a series of baseline winners. He held to love and then shot forehand down-the-line winners past Djokovic to break a second time. It was 3-0.

All that was about to change. In an eerie replay of the Serb’s semi-final against Federer, Djokovic strung together a few longer rallies, Nadal made a few errors and, voila, it was a break back. Djokovic also held a ragged service game courtesy of another loose Nadal backhand.

Under a light drizzle, Nadal now found himself on the receiving end of improving patterns of criss-cross shots struck from inside the Djokovic baseline. The Serb hit one flat forehand after another to either wing and Nadal, thrown into defence, double faulted for a break point and Djokovic drew one more error with a backhand down the line to level, 3-3.

But the Serb’s focus, unlike when he played Federer, pulled in and out, and the pendulum began its reverse swing. Djokovic twice found the net with his backhand, and he too double faulted to give Nadal the break and a 4-3 lead.

A distracted Djokovic spent the change of ends gesticulating to his box, berating himself and unable to regain that three-game sharpness. Nadal, steady as a rock, served out the set, 6-3.

It had taken an hour, with no easy points, only one ace, and barely a drop shot or net rush in sight.

The second set again did not start well for Djokovic: He hit a backhand into the net on the opening point. Then came a wild forehand error and, finally, a double fault to hand Nadal an immediate break. Nadal toughed out deuces on his own serve to lead, 2-0.

The third game also went to deuce, as did the fourth, though this time, Djokovic made the break-through via some poor serving from Nadal. It was all square again, 2-2.

The good news for the Spaniard was that Djokovic’s first serve was even worse. The Serb held the fifth game but then, just as in the first set, Nadal put down his head, speeded up his footwork and wrenched back control.

Now the rain fell more persistently but it did not dampen the Nadal whip of a forehand. The Spaniard broke and then pounded in big serves and ground strokes to hold for a 5-3 lead before the umbrellas went up and the players went off.

For more than half an hour, the uncovered courts soaked up the rain, and the two men returned to a heavier and stickier surface than they had left—and it appeared to affect Djokovic the worse. Three errors gave Nadal immediate set points and a remarkable backhand winner on the stretch took the Spaniard to a two-set lead, 6-3.

But the third set opened as many expected the first to begin. Every point stretched the other to their limits. Nadal saved a break point with the exchange of the match thus far, a pummelling rally that left Nadal smashing a decisive winner and Djokovic slumped in despair.

It was, though, to be another dejà vu opening: Nadal made a quick break to lead 2-0 but Djokovic broke back and resisted a string of deuces to hold his own in increasingly demanding rallies. Now, too, there were signs that Djokovic was making more consistent inroads.

A bullet of a forehand down the line took the Serb to 40-0 on Nadal’s serve and the subdued crowd ignited when a forehand error from Nadal put the Serb a break up in a set for the first time. The pendulum was now firmly on his side, and his first ace affirmed a 4-2 lead.

With a spring in his step and steel in his eyes, Djokovic was at full tilt and forcing deep drives to the Nadal backhand. He took a second break and served his best game of the match, fast and focused for perhaps the first time, to take the first set of the year on red clay from Nadal, 6-2.

The skies grew ominously heavy as rain leaked more steadily onto the already-heavy court. Nadal found it increasingly hard to power through the Djokovic defences while the Serb missed barely a thing. On his opening serve of the fourth set, Nadal defended and pounded through a gruelling 44-shot rally but came off the loser and Djokovic picked off a near-impossible cross-court backhand winner to break.

Nadal started to become distracted by the state of the balls—heavy, wet and covered in clay—while Djokovic was playing his best tennis of the match, apparently unaffected. He now edged ahead of Nadal in the points tally, 94 to 93.

Eventually, an extraordinary 8-game run to the Serb was halted by an angry Nadal, serving bigger and hitting more fiercely than ever. He was a break down but only 1-2 down—but did it mark a swing of the pendulum back to the Spaniard?

The question would remain on a sodden Philippe Chatrier court as thousands of umbrellas headed to the exits. For even the might of Nadal and Djokovic could not hold off the rain: Their destinies would have to await a new day.

Read the report on the conclusion of the final here