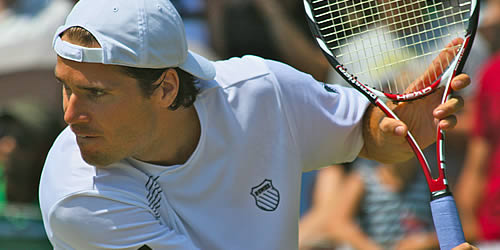 Tommy Haas had also won the Halle title as a 31-year-old back in 2009 Photo: Marianne Bevis

He loves grass, and he loves the German tournament in Halle that he has favoured since he first won it in 2003—perhaps because he went on to win his first Wimbledon the same year.

So loyal is he to the tournament down the road from home that he has committed to it for as long as he plays Wimbledon. After all, he had won the Halle title five times before, and four of those wins had led to the title at Wimbledon as well. What wouldn’t he give to do the same in Olympic year.

But to the form that took Federer to his seventh final in Halle. It took him less than an hour to beat old rival Mikhail Youzhny for the 13th straight time.

It took him three sets to beat wunderkind Milos Raonic, just as it had done in their two other meetings, both this year—on Indian Wells’ hard courts and on Madrid’s clay. And the impressive 21-year-old was giving the world No2 almost a decade in age.

And should Federer win in Halle again, it would be his fifth title of the year—he also won in Rotterdam, Dubai, Indian Wells and Madrid—and his 75th career title.

But no matter how loved the German-speaking Federer was with the German fans in Halle, he faced strong competition in the popularity stakes this time around. Not only did he play a German but a man who had defied the odds of injury, surgery and more to come back, at 34 years old, to break the top 100 from the depths of 896 a year ago.

Tommy Haas, like his long-standing friend Federer, possesses looks, charm, a single-handed backhand and a game suited to the grass, and reached No2 in the world back in 2002, but he had not won a title since this very event in 2009. And it meant a lot:

“To be in another final on German soil is something I really hoped to happen one more time. I’m going for my 13th title, which is one huge goal that I still have, against possibly the greatest player of all time.”

The Haas and Federer friendship goes back to junior days and their senior rivalry has lasted 12 years: Their first meeting was at the 2000 Sydney Olympics, which Haas won, but he had only beaten Federer once more, in 2002, in 11 subsequent meetings. 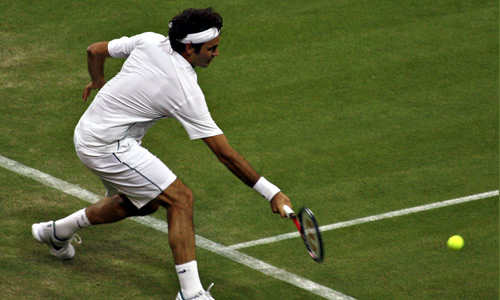 Ahead of the final, Federer had won 56 of his 61 matches and seven of 12 tournament titles since last year’s US Open semi-finals

On sentimental grounds alone, then, wild-card Haas—who had taken out No6 seed Marcel Granollers, No3 Tomas Berdych and No8 and defending champion Philipp Kohlschreiber—could surely count on strong home support in the first entirely over-30 final in the tournament’s history. It was, in short, a marriage made in heaven for the home fans.

Federer took up the racket where he left it the day before, breaking quickly for a 3-1 lead on a court criss-crossed with shadows from Halle’s web-like roof. But the crowd roared Haas on when Federer, whose dark grey figure looked the negative of Haas’s white one, played two weak forehand errors to give the home man a break back and Haas held to lead for the first time, 4-3.

He held to love again to lead 5-4 and to unexpectedly throw the pressure onto Federer, who almost obliged by offering up two break points, but the Swiss survived.

Haas seemed to grow with confidence with every shot, firing winners from forehand, backhand and overhead for another love hold. Again Federer had to serve to save the set. Time to attack the net himself, which he did with great success: They would play a tie-breaker.

Having taken the early advantage, Federer lost four points in a row to go 4-2 down and Haas went on to earn two set points at 6-4. The German took the second with a huge serve for a one-set lead.

Federer had a chance to open the second set as he had the first, with two break points in the second game, but he failed to capitalise and then looked very shaky on his own serve, making two double faults before holding.

The Swiss looked all at sea, making errors across the board while Haas took full advantage. Again Federer went 0-30 down on serve and then faced deuce. He came to the net for a volley winner and gave small fist pump but the next time he was passed at the net by a stunning cross-court forehand.

It now felt as though the match was in Haas’s grasp. Although he could not break, he held much more easily to love. Again Federer faced deuce after two careless unforced errors—one a volley, one a forehand drive—and then three more, all due to errors.

A wildly overhit forehand brought up break point and a rally that had everything—lobs, drop-shots, touch volleys and finally a backhand crossc-court winner from Haas—made the break to leave the German serving for the title.

Federer then added some extra drama with that rarest of things, a heavy fall as he lost his footing chasing down a wide forehand. He looked hurt, but shook off his arm to recover, only to watch his friend serve out the match in style, 6-4.

If the Halle crowd was content to see anyone beat Federer at their event, it was Haas. Indeed if Federer himself could have chosen to whom he might grudgingly lose, it might also have been Haas.

The German man, the first home player to win the Gerry Weber Open title twice and playing some of his best tennis in a couple of years, had not lost a final since 2002 and had not beaten Federer since 2002.

It may have taken him a decade, but this was a win worth the wait.